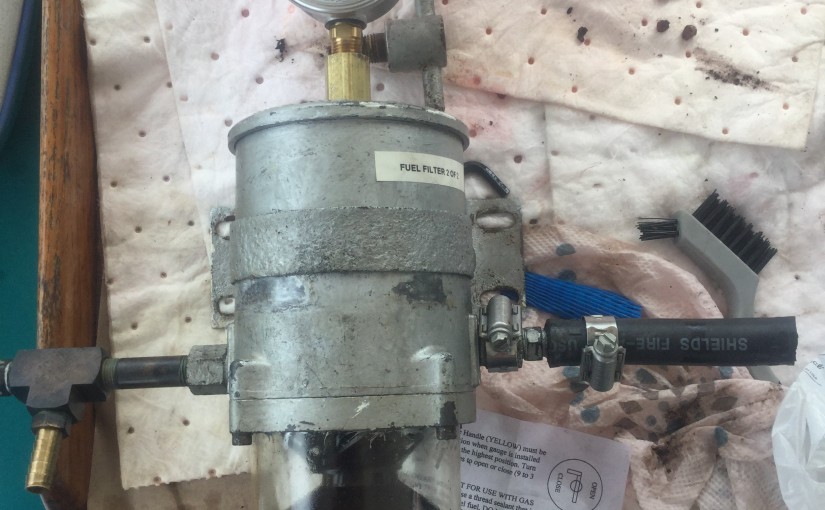 Ok, well, maybe not slimed like Bill Murray in Ghostbusters but definitely mostly clogged with globs of tank sealant.

I think I mentioned that we were having an issue without port side fuel tank not feeding any diesel to our system. Well, after some troubleshooting and consulting with the prior owner we discovered that some sealant had made its way into the fuel tanks when the access panels were reinstalled years back.  One glob had shown up in the fuel shut off valve previously…..so guess where I found this one? You got it….fuel shut off valve.  I had begun troubleshooting the fuel lines and that was my next stop anyway but it always helps to get a little advice.  I had already pulled the Racor fuel filters since I could see some globs of something in those. Our port side filter wasn’t draining from the petcock at the bottom of the fuel bowl so that means they needed a rebuild.  Racor filters are amazing pieces of engineering in a pretty simple package.  It only takes about 20 minutes rebuild one after you remove it or get the fuel bowl off while it is still attached to the bulkhead.  That can be tricky depending on where yours are installed.  The bolts that hold the collar on the fuel bowl are 1/4″….although on our older unit they are hex bolts…..not overly convenient….. 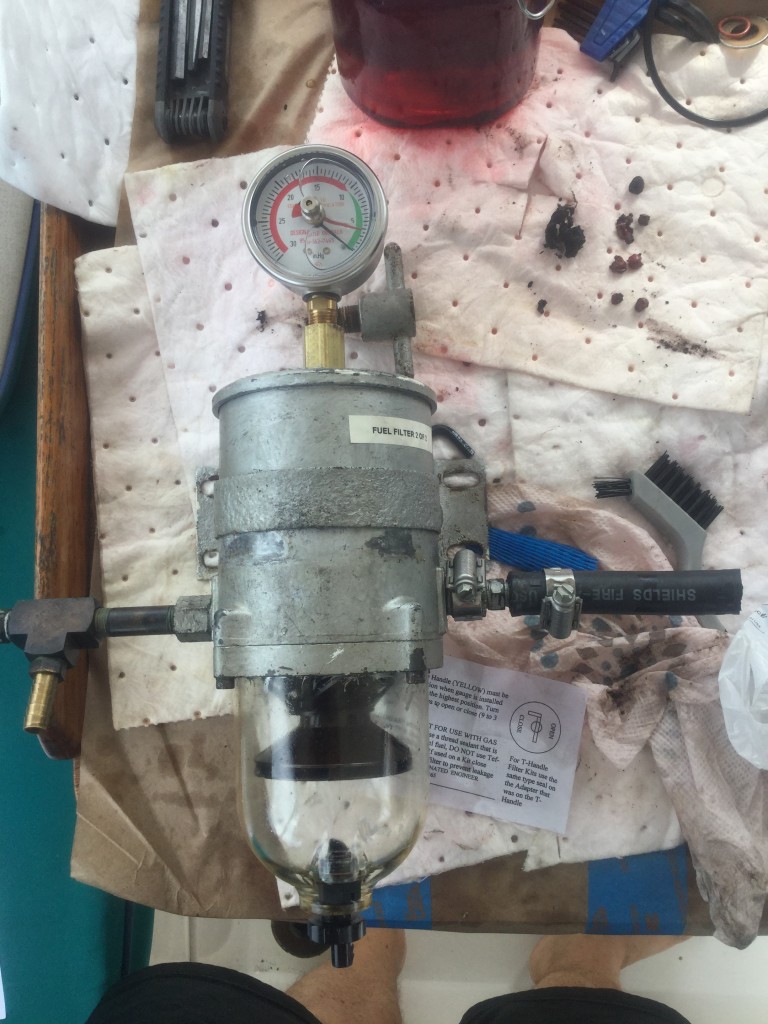 This is the nice, clean, rebuilt Racor filter….with a newly installed vacuum gauge…when the pressure goes up you know the filter is getting clogged so you can switch to your other filter……normal pressure is about 6 to 10PSI according to Racor…..it’s an older one but not much has changed……the diesel flows in from the right, down to the turbine which spins off the water and debris in the lower bowl, then the fuel goes back up through a ten micron filter and then comes out the left side.  We have another vacuum gauge for the system but I think it’s also clogged with sealant so that gets a cleaning later.  I like the idea of having the gauges on the individual filters better, I think.

Below are the piles of what appears to be the Permatex style sealant that also appears around the fuel tank access panels on the tanks.  Apparently, some of this got squeezed out of that joint and into the diesel tanks when they were last sealed and has been getting slowly picked up out of the tanks over the last couple of years…..eek….I plan to add a pair of temporary, clear, 250 micron filters to be sure we can keep these out of the Racors until we feel that there are no more or we resort to a fuel polishing system. 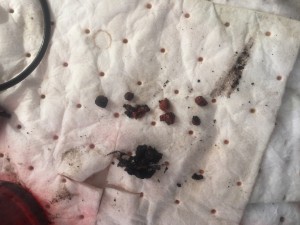 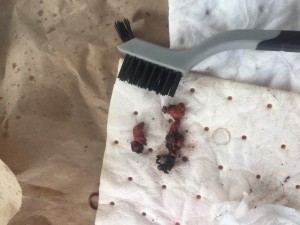 That’s is all for now…..it’s happy hour…..next time…I’ll be “bringing in the (steering) sheaves”…. 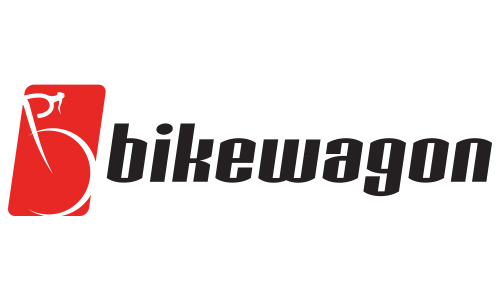 We are very excited here aboard Kitty Hawk to welcome our newest sponsor Bikewagon.com…..

Transportation is critical when you’re away from (or without a) your car for months, or years, at a time and these bikes fit the bill perfectly.  They are comfortable, light, have a wide gear range and are easy to fold and store when not in use.  Don’t get stuck with a tiny slow bike….check out bikewagon.com !!!

We recently received our new Montague Paratrooper folding mountain bikes from Bikewagon and we had a great experience.  Dale and the folks at Bikewagon helped us screen, evaluate and finally select our new bikes and accessories.

If you are looking for a new folding bike for a sailboat (or for a regular bike or folder for on land) check out their website and see what they have to offer.  (Don’t forget to mention you saw them here at learntoliveaboard.com too!!!)

Our new bikes only took about five minutes to un-box and assemble.  We can have them off the boat and on the dock fully assembled in less time than that now, after a little practice. 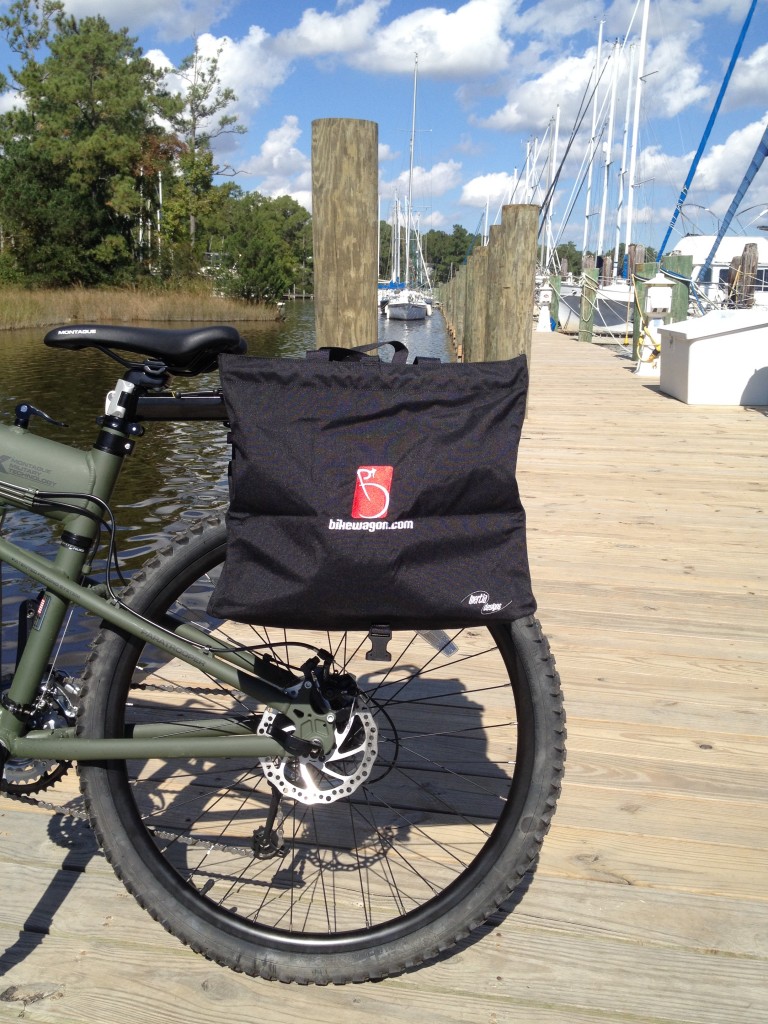 The best part is,  for a full size bike, they fold and store in the salon out of the way while we are underway….. 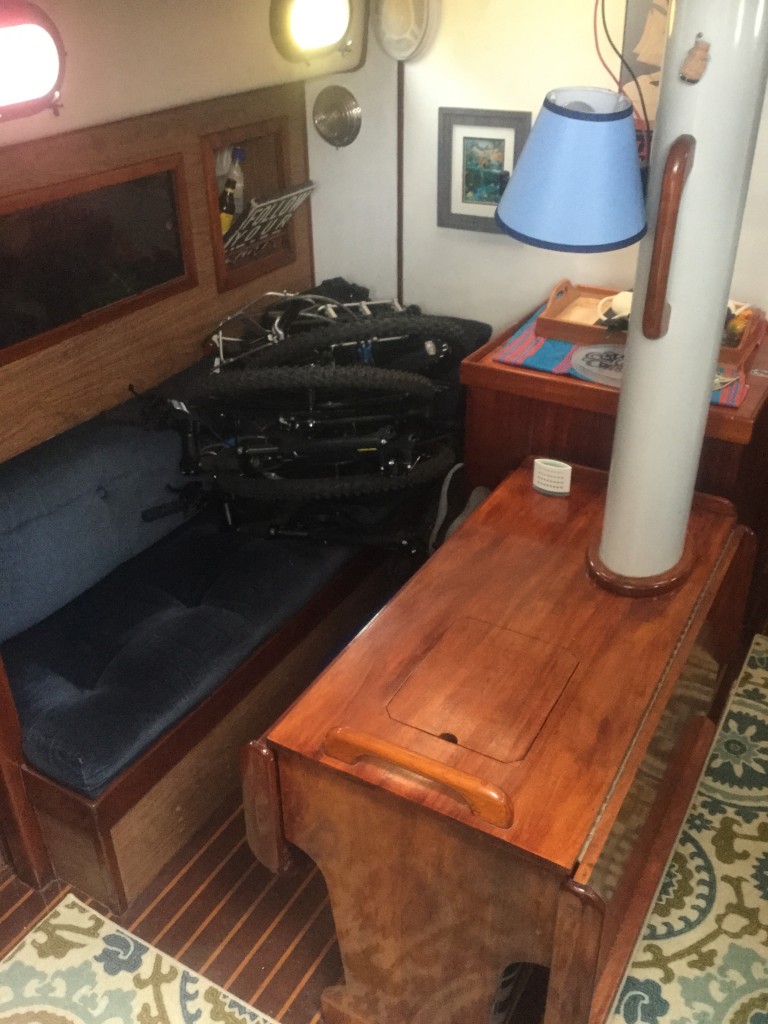 Well, it’s been a pretty eventful month, or so. We took advantage of our time in Oriental to upgrade our battery banks wiring and a few other things.  Some of our battery bank cables were undersized, not properly crimped, our banks lacked a main fuse and our smaller bank had been wired in a slightly less than a fully efficient manner.  We also installed two Bogart/Trimetric (Model TM-2030-RV) battery bank monitors which have made keeping tabs on our charging and battery bank status much, much easier.  That’s one of the things about buying an older boat, she’s been through a few owners and while some were meticulous, some weren’t, and if a system is working one owner may never have had the need to address or investigate the status of the individual components that may not have been exactly “up to snuff” when installed by the prior owner, owners or contractors or the standards have changed over time in favor of better, safer or more efficient methods.. 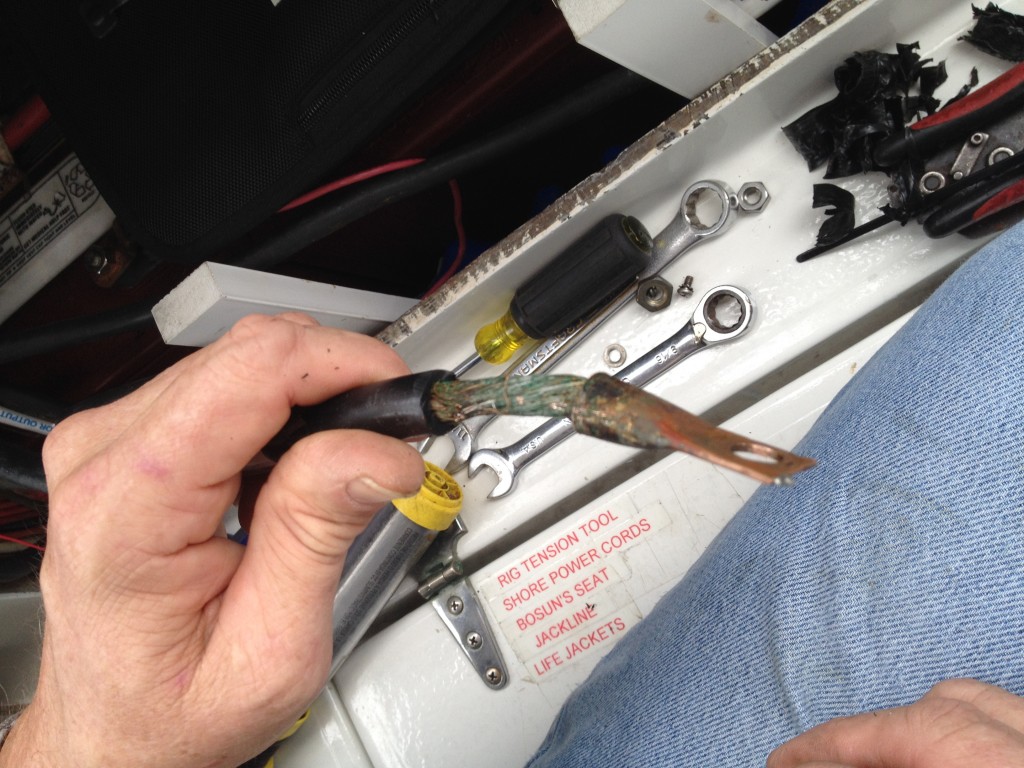 We also added a Blue Seas electrical master panel to our AC shore power system that has a 30 amp, dual pole, ELCI (Electrical Leak Circuit Interrupter, if your boat happens to develop a leak of AC current into the water while plugged into shore power, which is extraordinarily dangerous, it shuts off the AC power).  The breaker itself has a sensor in it that measures the amount of electricity flowing out and compares it to what returns and if there is a slight difference it trips the breaker.  We discovered once we powered up this new panel that our water heater was wired incorrectly since the new breaker tripped as soon as we energized the circuit.  As it turns out, the wiring for the water heater was a commercial type of wiring (IEEE marine cable, intended for use on Navy and commercial vessels….with this type of wire red is ground, black is hot and white is neutral, so our water heater was basically wired backwards, which still allowed current to flow through the element but the new more sensitive breakers caught the difference in the polarity/voltage returning and shut it down) since the color coding was different it must have confused whoever originally wired it.  It took an extra fifteen minutes to correct this and then things operated perfectly.  We also added a safety cover to the interior of our shore power plug connection which was missing.

I’d like to extend our gratitude to Jim Bonnett, the owner of  Wavetop Technologies in New Bern, NC, for his assistance with the battery and AC upgrades.  He’s been having some website issues but if you need any work he’s an ABYC Master Technician in a lot of fields (maybe all of them, I haven’t counted yet) . His current website is www.wavetop.com but he may migrate to a new one if his current issues prove to be linked to that web address.  Jim is so educated about AC and DC systems and wiring it can make you dizzy just listening to him talk….he’s a very smart guy. You can also reach him at Jim@wavetop.com 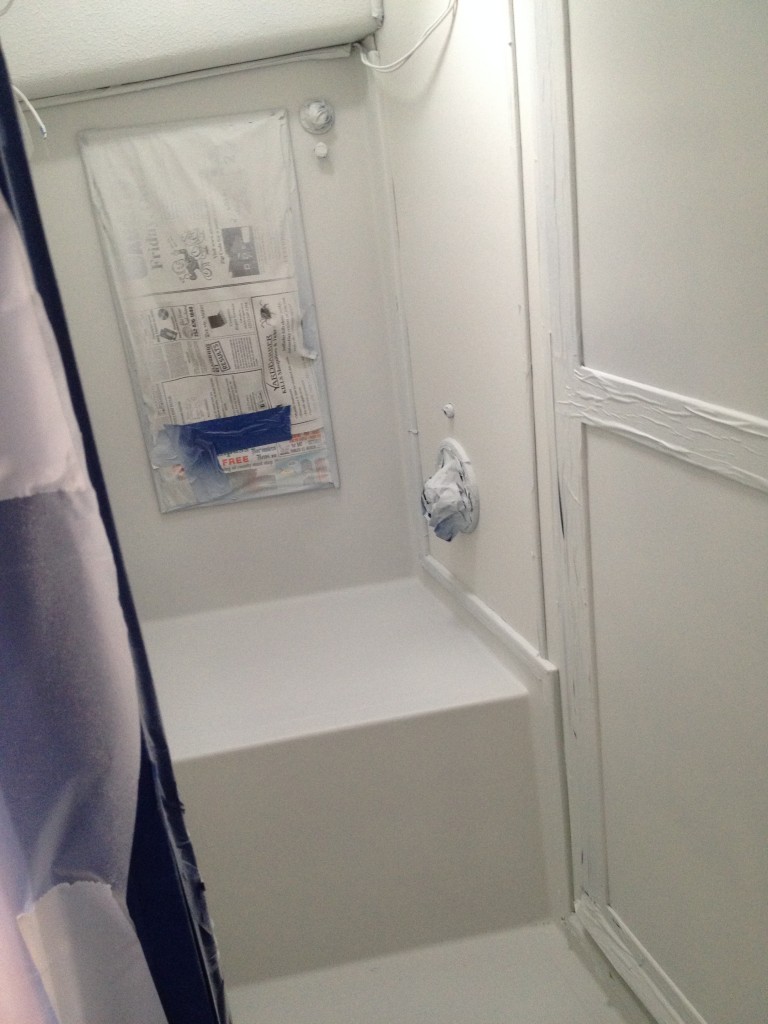 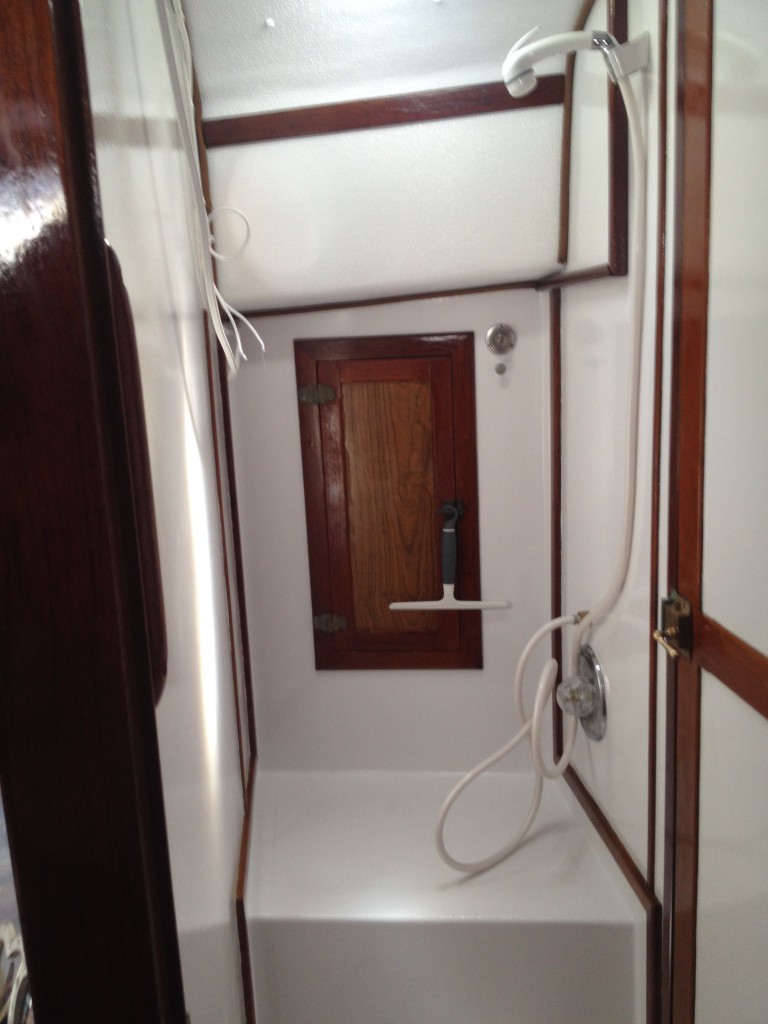 I also painted new length markers on our anchor chain and replaced the shackles….. 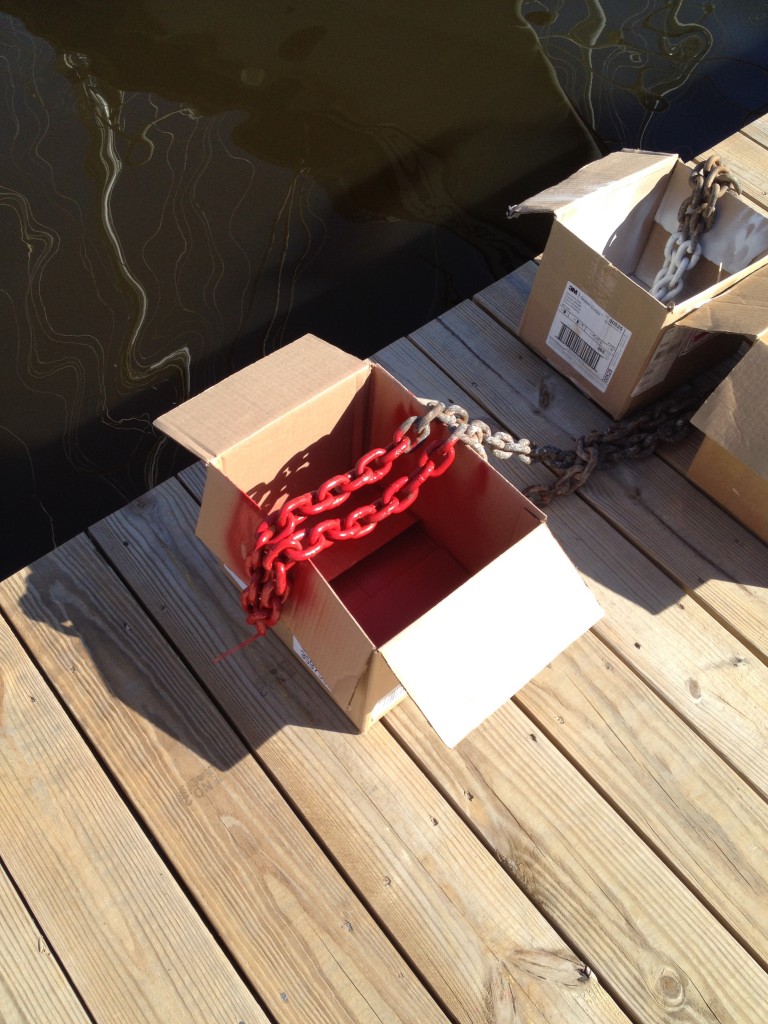 We’d also like to give some well deserved praise to Pete Waterson of Seacoast Marine Electronics (http://seacoastmarineelectronics.com/) in Oriental, NC.  Pete is the owner and installed our new NMEA 2000 backbone wiring, AIS transceiver, a new Raymarine I70 display, a masthead anemometer and wind direction sensor which is now all tied into our Garmin 741XS chartplotter at the helm.  Pete also installed a new VHF antenna and Windex while he was at the masthead.  Pete also helped me (or maybe I helped him) rewire our binnacle wiring and add a power/ground bus to clean up the connections there and eliminate some voltage loss and an issue with a weak ground.  If you find yourself in Oriental or nearby and need any electronics or assistance be sure to look Pete up.  He’s  a great guy and his office staff (Jill, his wife and Betsy)  are super friendly and helpful.

We were later joined by our good friend, Mike, in Oriental, just in time for the Ol’ Front Porch Music Festival on October 17.  It was a great day, beautiful weather and lots of good music and food.  Apparently, this was a tradition among the old time farmers in the area and on Saturday nights they would come into town and play music on a variety of front porches around town.  Time and progress being what they are, this tradition was slowly lost and has been revived during this once a year festival.  The Carmona Brothers and Laurelyn Dossett were the final performers of the day and if you’ve never heard either of these, I recommend looking them up online.

We waited for some weather to pass and departed Oriental on October 20th around 8:00am.  It was a nice trip.  We arrived around 11:45am in Morehead City, NC since we wanted to make the first day short and non stressful…then Murphy reared his ugly head.  As we approached Portside Marina in Morehead City a large tugboat that was bow in at the state port abruptly moved astern into our path.  I was forced to throw Kitty Hawk into full reverse to avoid colliding with the tug.  As the dust settled from that encounter we again proceeded toward the Portside Marina face dock.  There was suddenly something very wrong.  It took about five seconds for me to realize that for some reason we were no longer getting any forward propulsion.  I immediately shifted to neutral, then tried reverse and got the same result….no response …I could hear the transmission shifting and assumed we had lost our throttle cable.  After advising Mike and Kim that we were going to be coming into the dock at about 3 knots SOG (speed over ground) I called the marina hands on the dock on our VHF radio to let them know.  We managed to dock pretty easily, all things considered, despite coming in at what felt like warp speed.  Once we got settled, we diagnosed the problem and it was, in fact, the throttle cable that had broken just below the shift lever.  I spoke to the owner of Portside Marina, Denard, who is  a super nice gentleman.  He not only found the part for us, but let his brother in law, who works at the Marina, drive me over to get it.  The cable was replaced two hours and $27 later…..Portside Marina is the only place I’ve ever walked into and been immediately invited to partake in the employee lunch.  They were having fish one of the guys had caught and a local restaurant fried them up for them….talk about hospitality !!!

Our trip South was Kim’s first long distance trip on Kitty Hawk….she got her first experiences in the ICW (and her first grounding, so that’s over and done with), navigated out of the Cape Fear Inlet and made two overnight offshore trips.  One was between Cape Fear, NC and Charleston (a rough one) and the second was between Port Royal, SC and Jacksonville, FL.  During the first hop we even got the wind to cooperate and we sailed for 6 hours. 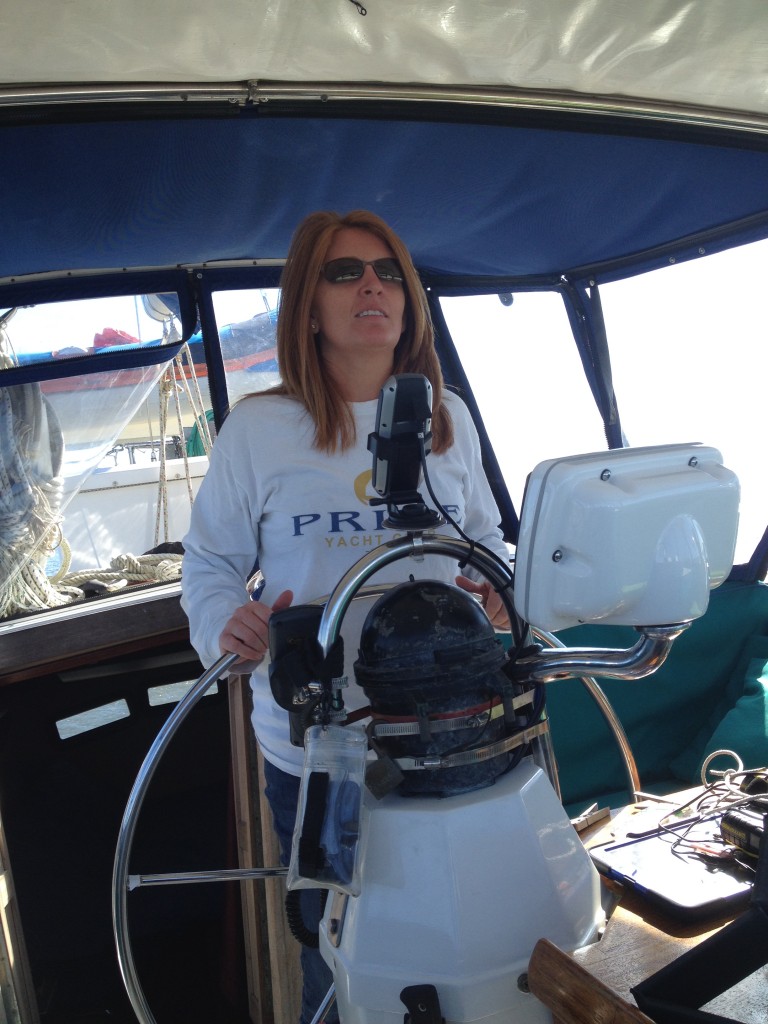 The Admiral at the helm…..

Next time I’ll detail our stops at Beaufort, SC and St.Augustine, FL and share our ghost video from Facebook if you haven’t seen it yet…..