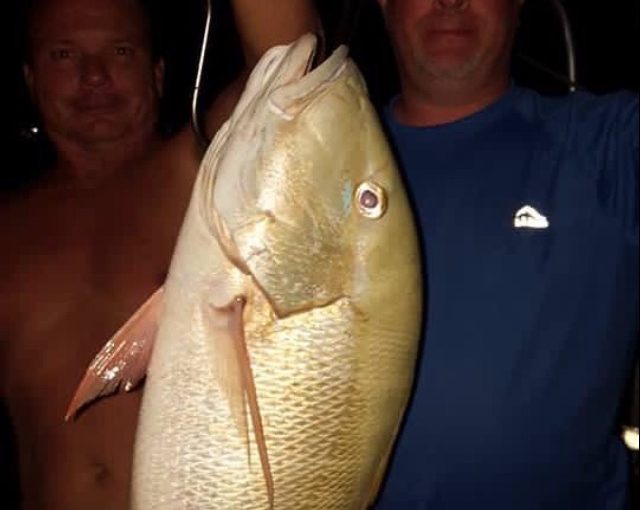 So, in early February we made the run from Little Farmers Cay to George Town to send Mike home from that airport.  We were sad to see Mike leave, but, he has a home and boat of his own. The palm fronds were taking over his yard and breaking out all of his windows (hahaha inside joke there)……

George Town is west of and adjacent to Elizabeth Harbor, which is bordered on its East side by Stocking Island.  Stocking is the home to a few interesting sights. Boats in George Town tend to do what they call the “George Town shuffle”.  As the wind changes directions the boats scurry from side to side of the harbor trying to hide from it to insure a smoother night’s sleep at anchor and a shorter, drier dinghy ride to shore.  We are fortunate enough to weigh in at about two to three to three times what the average sailboat weighs, so unless it’s blowing over 20 knots consistently and we are very exposed we sleep well at anchor no matter what.  That weight, coupled with our 85lb Mantus anchor and our inventory of 300′ of 3/8″ chain tends to keep us in place and peaceful once we set the hook.  It has the added bonus of allowing us to avoid anchoring close to the crowds all desperately seeking that protection.

The below image centers on Elizabeth Harbor…..with George Town in the lower left corner.  One of the interesting features of G-Town is Lake Victoria. That’s the small lake in the center of town that is open to the harbor via a small overpass/tunnel that makes you feel like you’re on a small water ride at Disney.  I could never get a straight answer from anyone about whether or not the lake access was manmade or natural and the bridge was simply added for vehicular access…..but my gut tells me the water access was cut for boats to enter and the bridge added afterward. 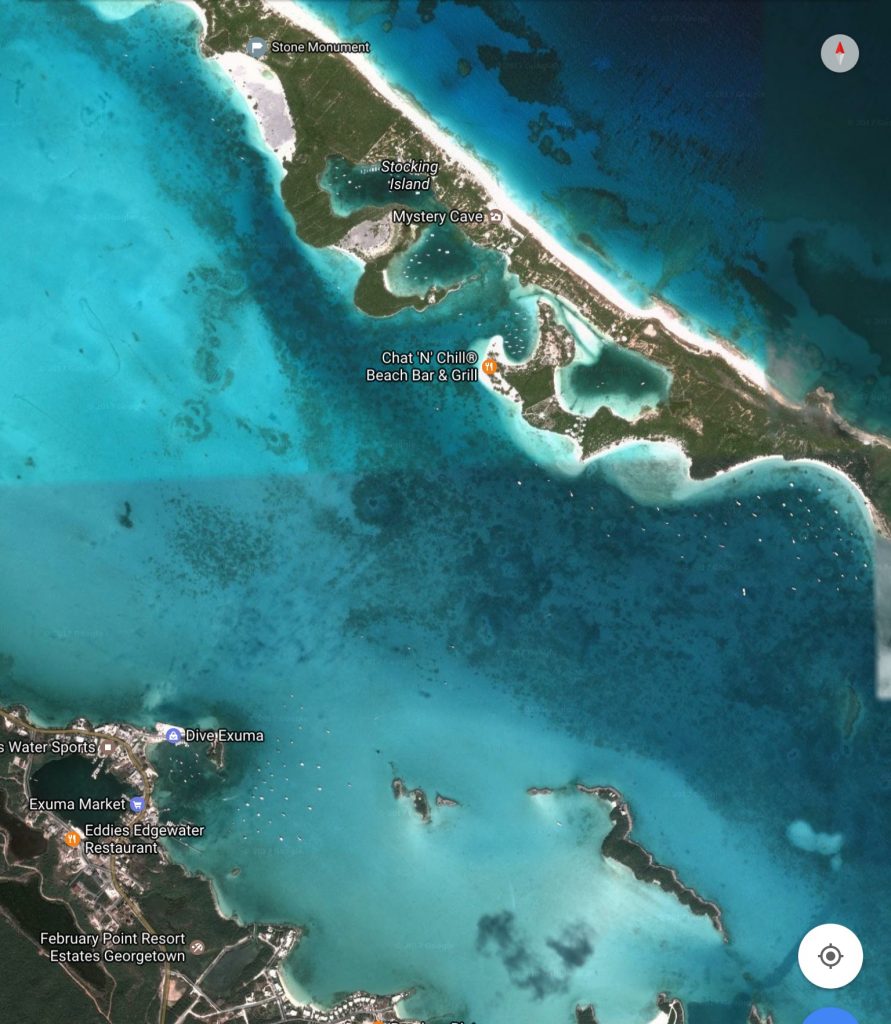 We spent ten days, a few before Mike’s flight and a few after.  We had to get away from G-Town though, as it is crowded and was becoming more so as the cruiser’s regatta approached. There were over 400 boats by some accountings.  Now, don’t get me wrong…it’s a huge harbor….but that’s still a lot of people and boats for a lifestyle we chose because of an ability to escape crowds….We met some great people in George Town, we just didn’t want to meet ALL of them in one week…..

We are asked about George Town a lot and the only way I can describe it is a “summercamp” (although technically in winter) for adult boaters.  There are quotidian activities that made it feel a bit like groundhog day, …..volley ball, yoga, art classes, water aerobics and so forth.  It’s ok in small doses for us, but that’s about it. Different strokes for different folks.  There were some people who stayed there for the whole season and it is their entire destination every year. 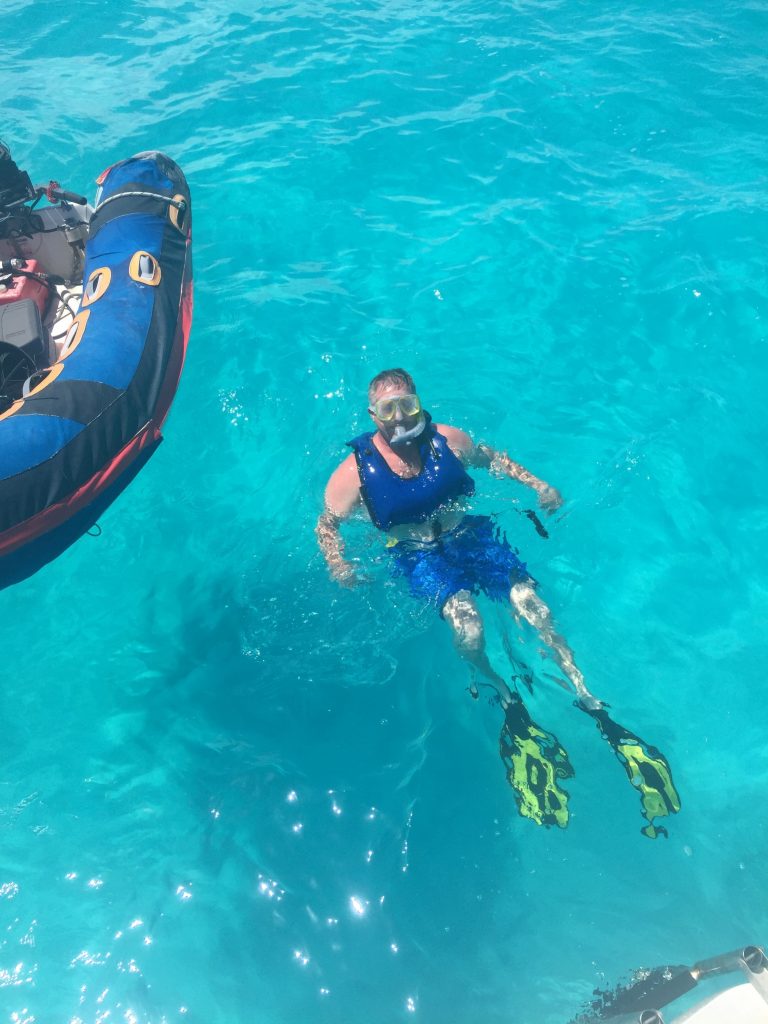 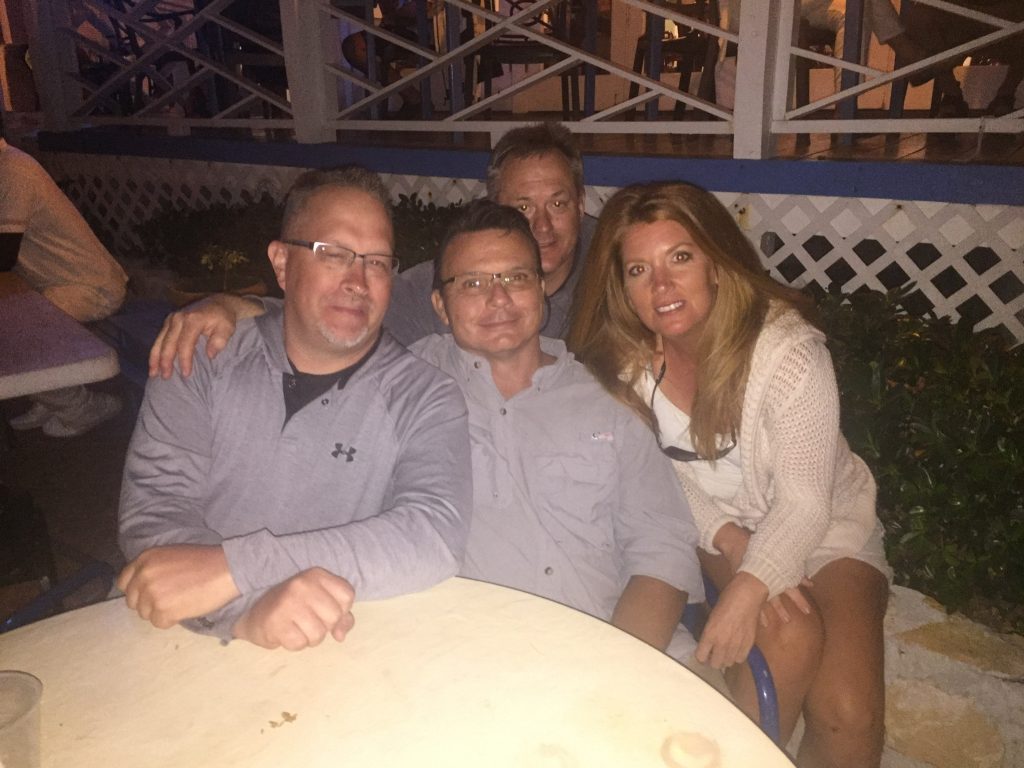 There was some decent hiking to be done, some spear fishing and snorkeling in the George Town area.  We even managed to get a dozen whelk (a catchall name for a variety of species snails) which we boiled, cleaned and dipped in garlic butter.  I thought they tasted like chewy lobster….Kim disagreed…..the parts we had to clean off made great bait though…. 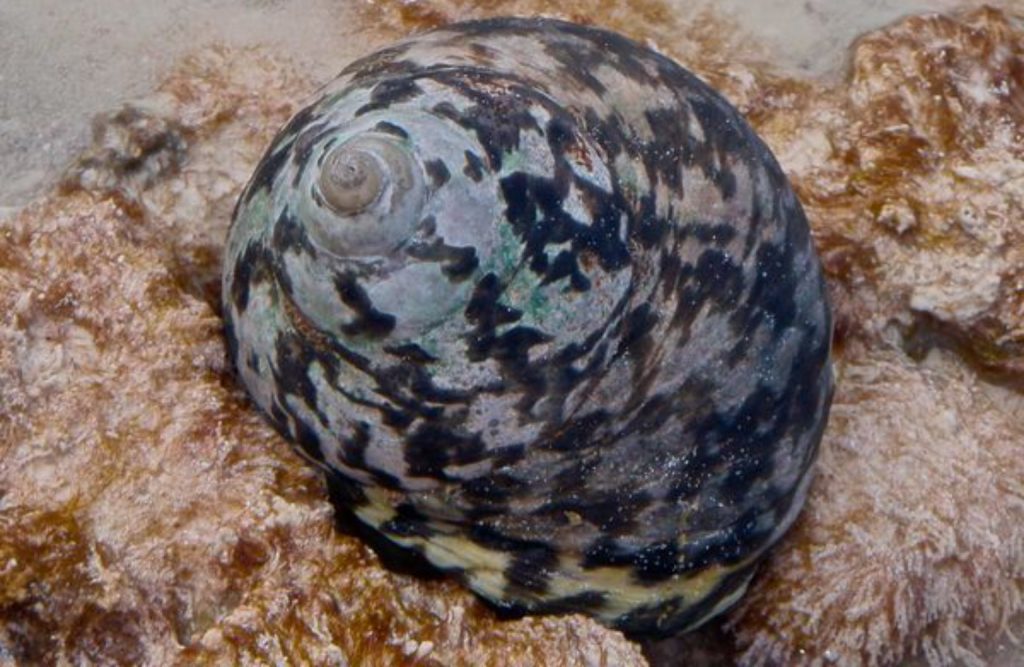 A whelk of the variety which we feasted upon…..

and Tom caught this …….he was kind enough to call it a team effort ….. 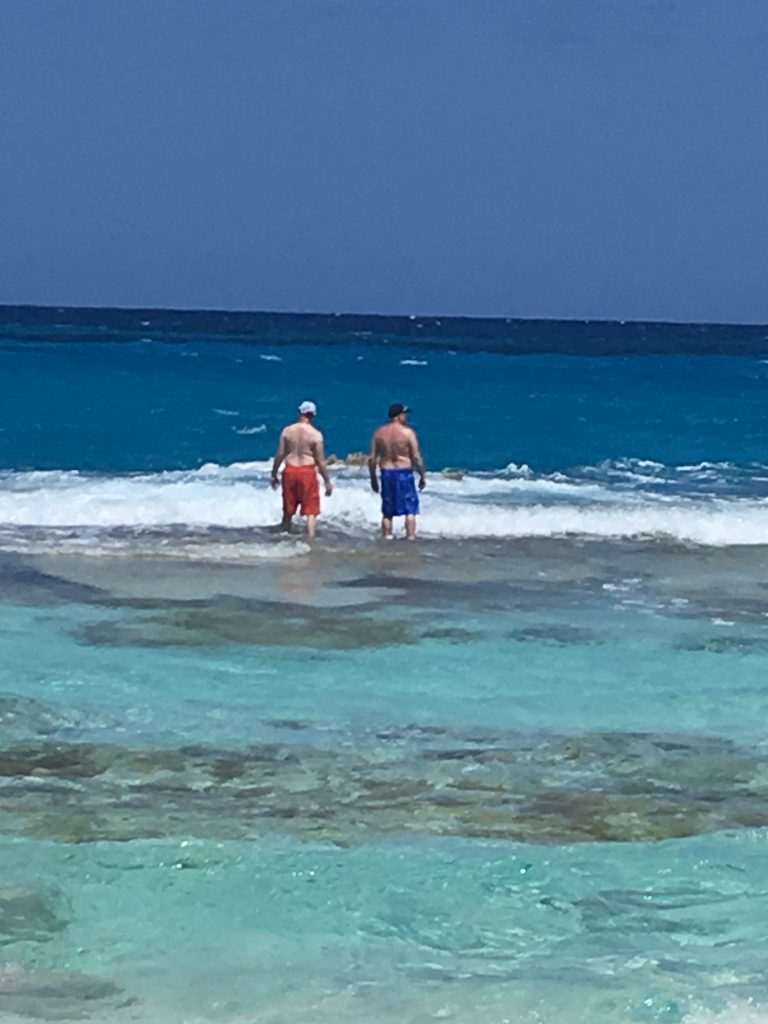 Tom and Bob looking for Atlantis…..on the east side of Stocking Island…. 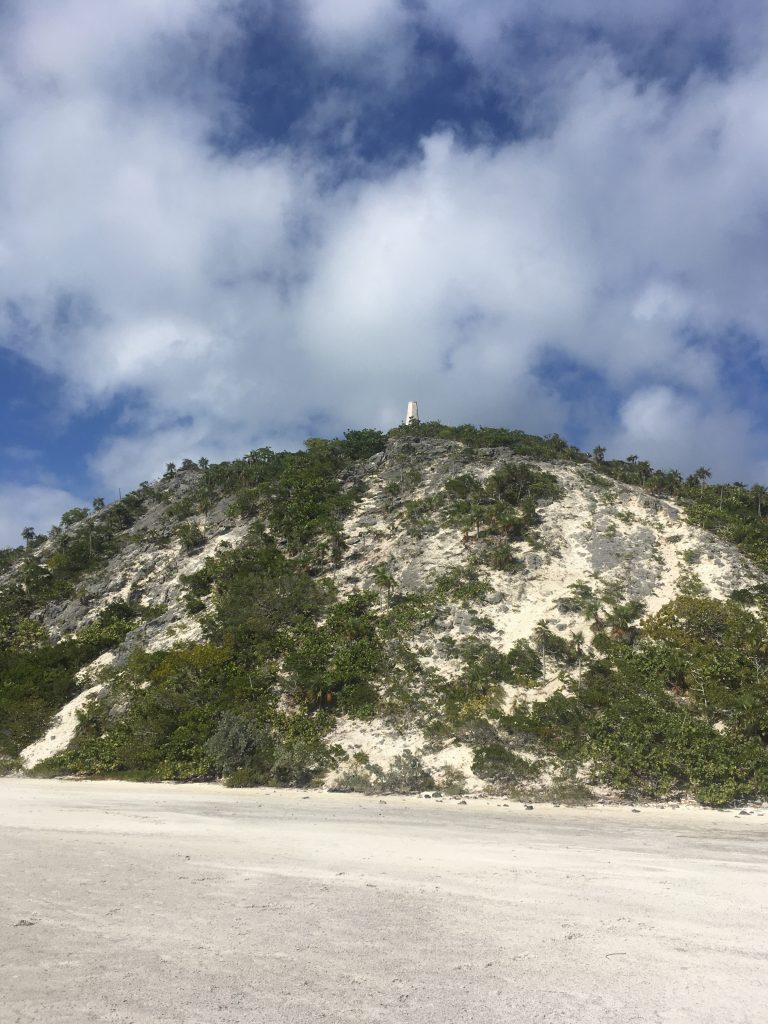 The view from the top….. 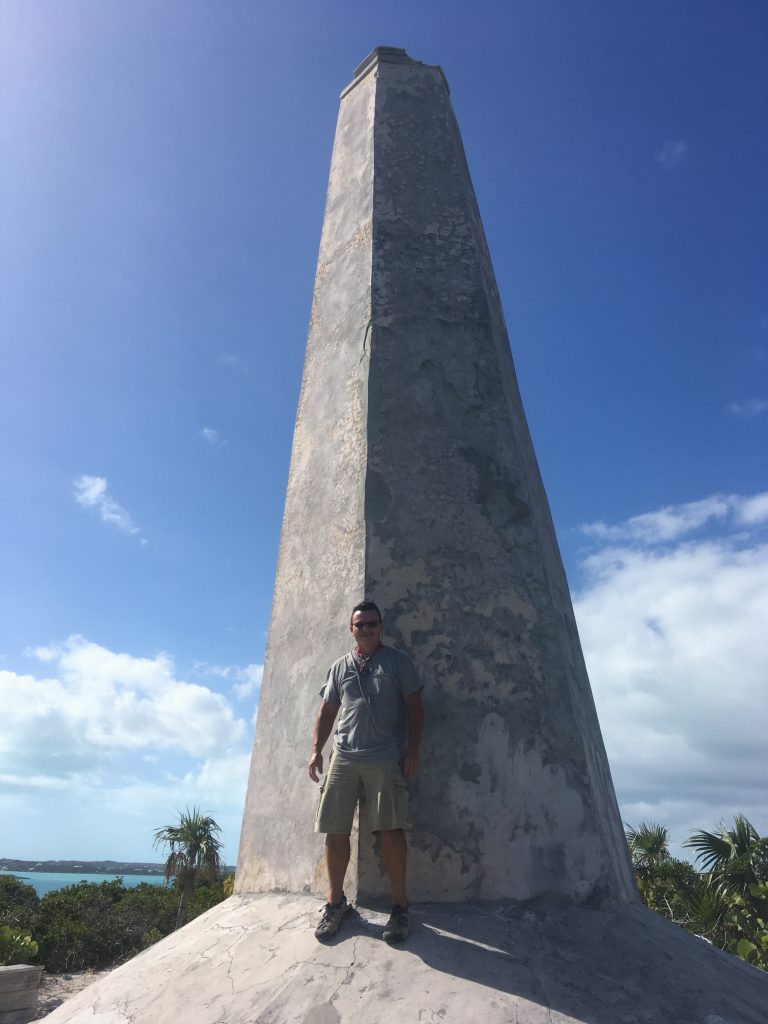 Me…..one foot in the dark and one in the light …..as usual 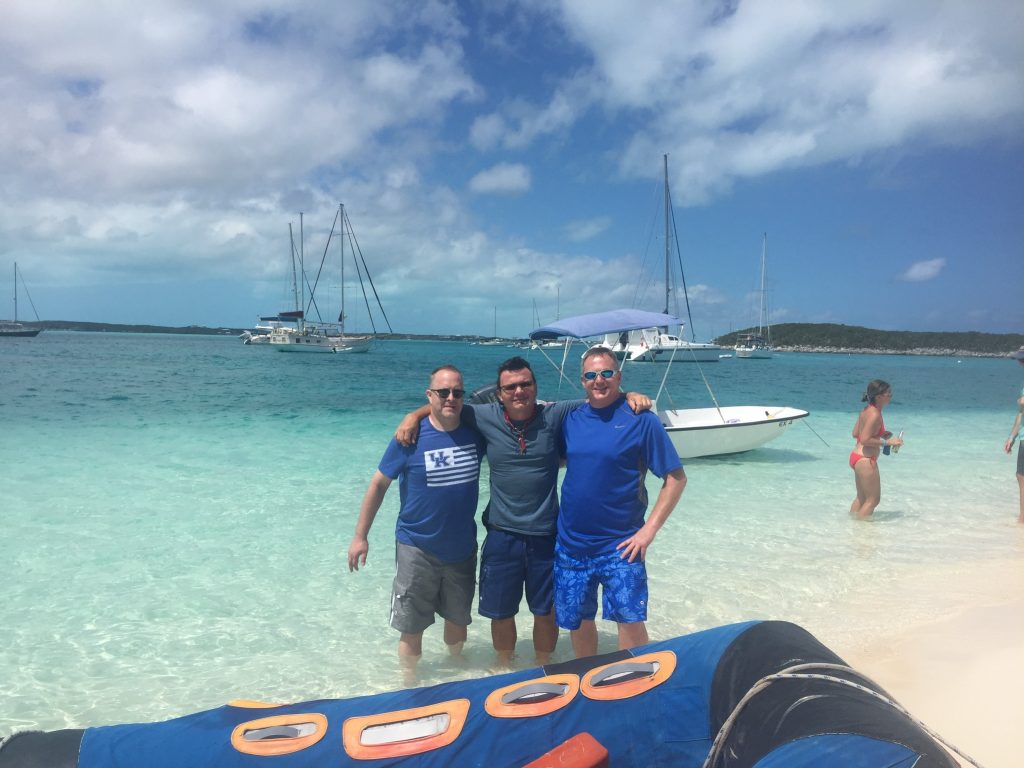 Tom, me and Bob……at the Chat n’ Chill Beach 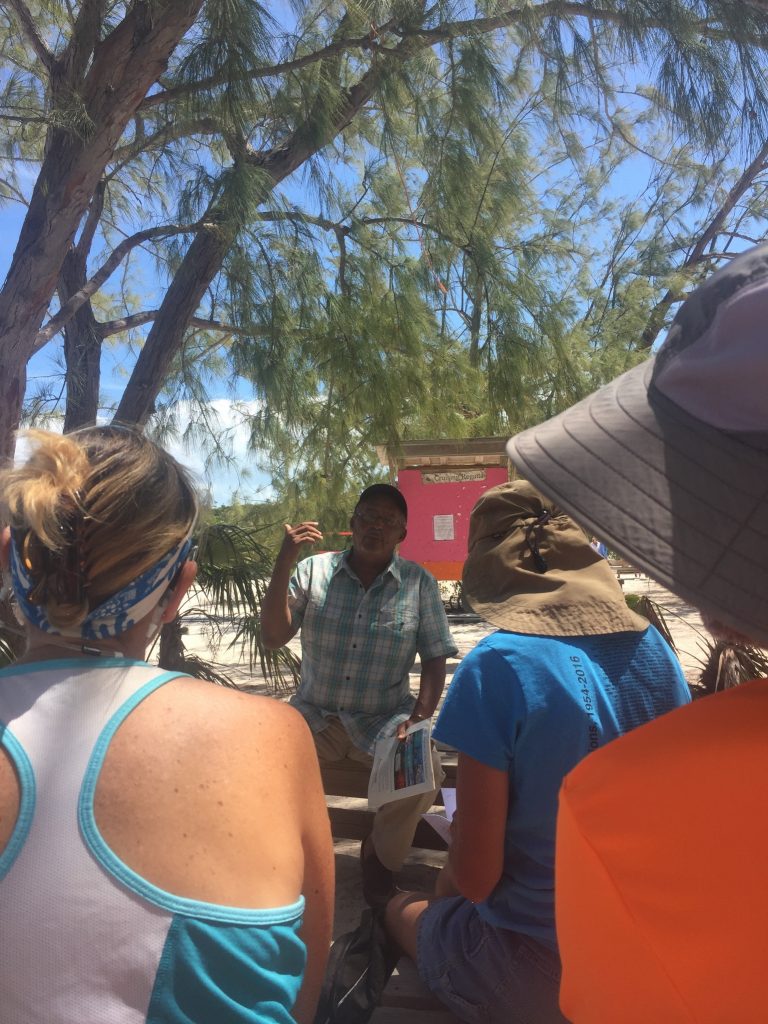 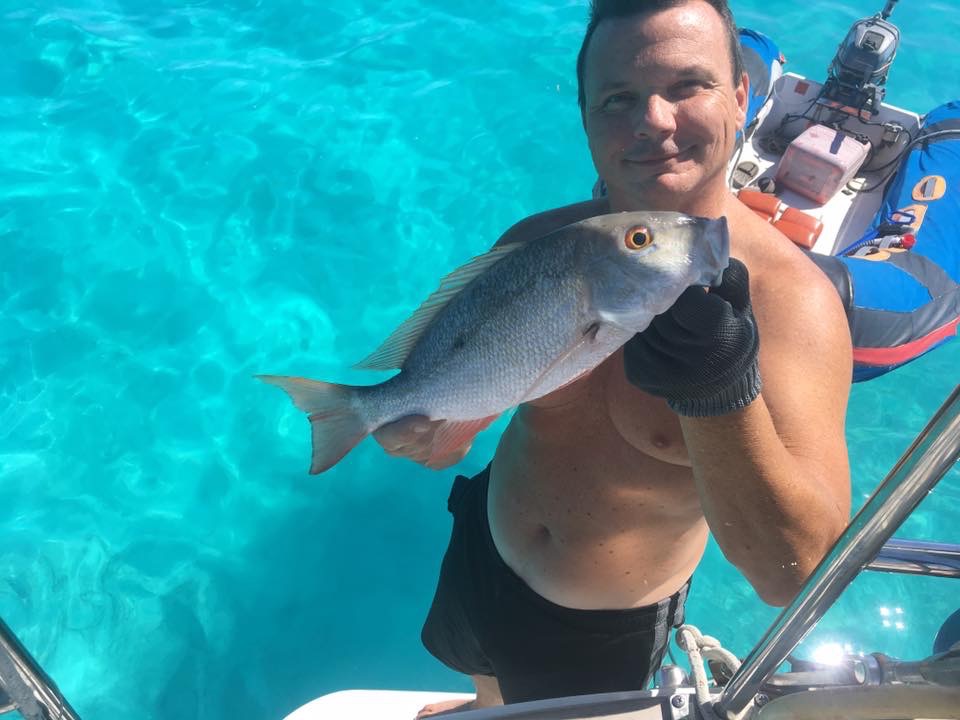 Mutton Snapper!!!! Caught during our first stay with Mike… 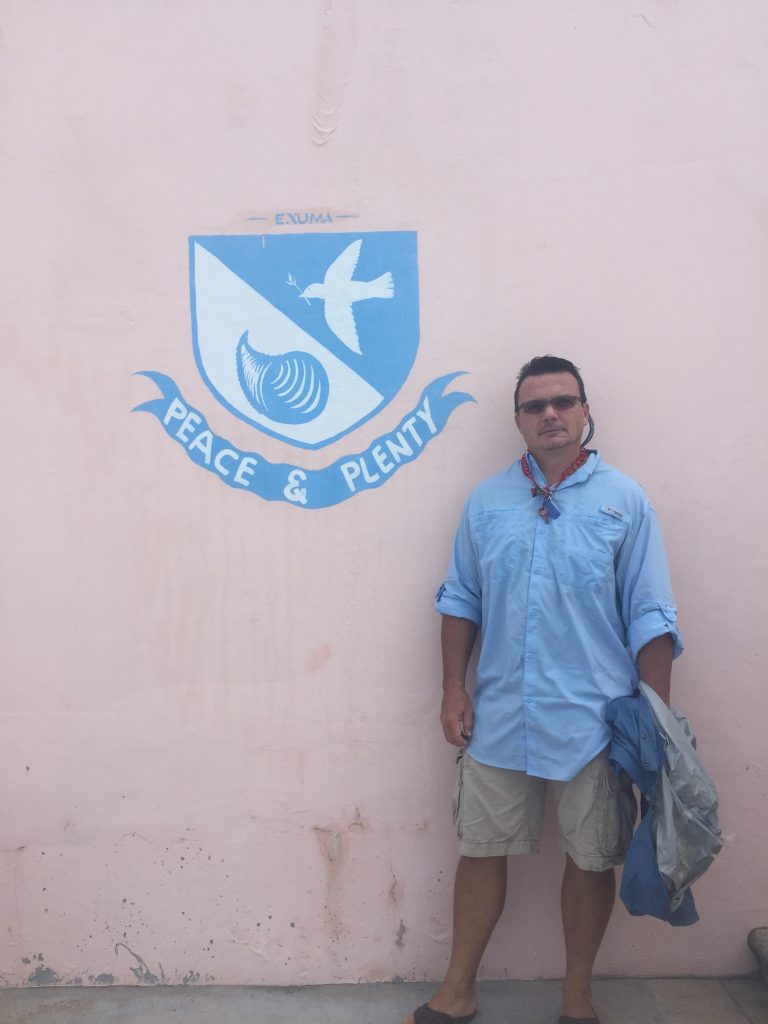 The famous Peace n Plenty hotel…..it became our favorite place due to Jamaro, Emmitt and Tim (plus his adorable son Mason) the bartenders !!!! 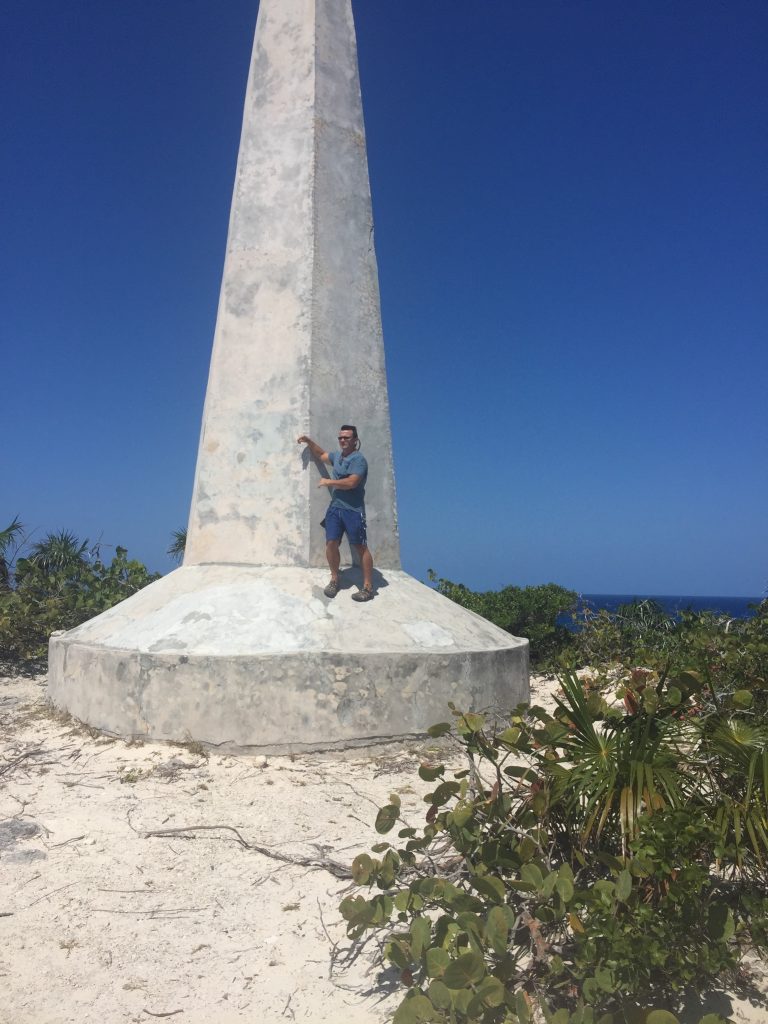 Where’s that stone monument ? It’s over there 💪👈 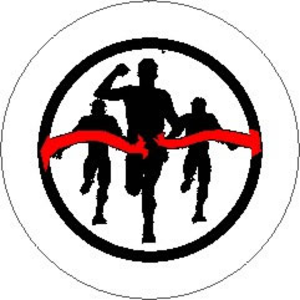 During a recent update to our analytical software for our blog we discovered that a listed feature began to function in a more useful manner.  In the home page for our “dashboard” where it lists all the plugins and behind the scenes software that make the blog run, there was always a field that said “Top Visitors”.  There usually wasn’t any data in that field or it was simply an IP address.  Apparently, the creators of that function have improved it and now it lists the subscribers by name, assuming you are a subscriber when you visit.  In recognition of this development we have decided to give a prize away to the #1 visitor for April…….and that person is……(drumroll please)..

BARRY BRIERLEY!!!!! Congratulations Barry and thank you for your continued support of our blog !!!!….

Barry, send me a PM on Facebook and I can give you some choices for your prize….they do sell Cuban cigars here and there is a brand of Cuban rum available also, I think that’s called Havana Club !!! 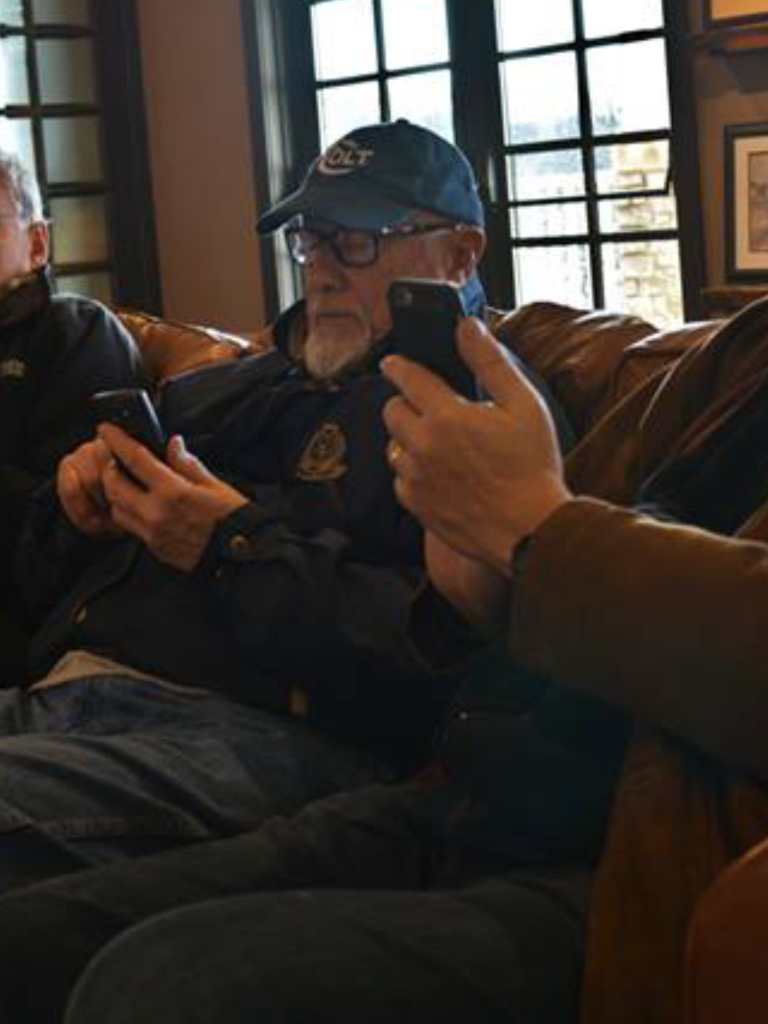 Here’s Barry…I’m sure he’s reading our blog on his phone right there !!! And maybe recruiting his couch mates to subscribe too !!!

Here’s the view of the analytical page that generates the stats….better luck next month Jan, Dave, Kevin, Emerson and K Flick !!! 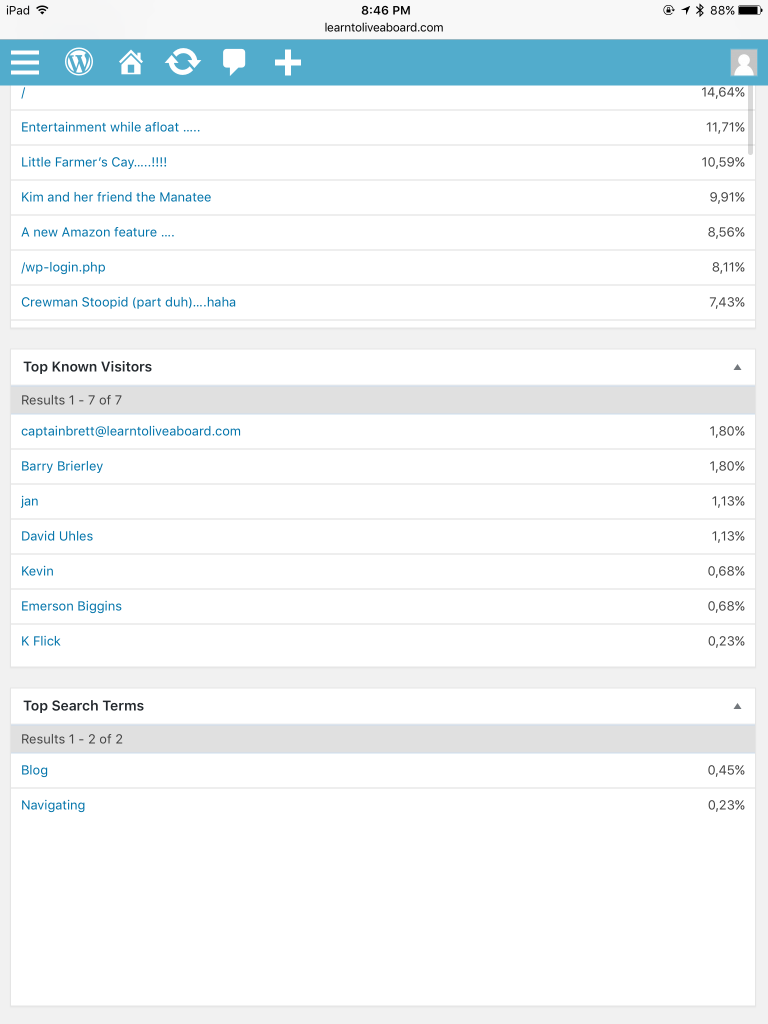