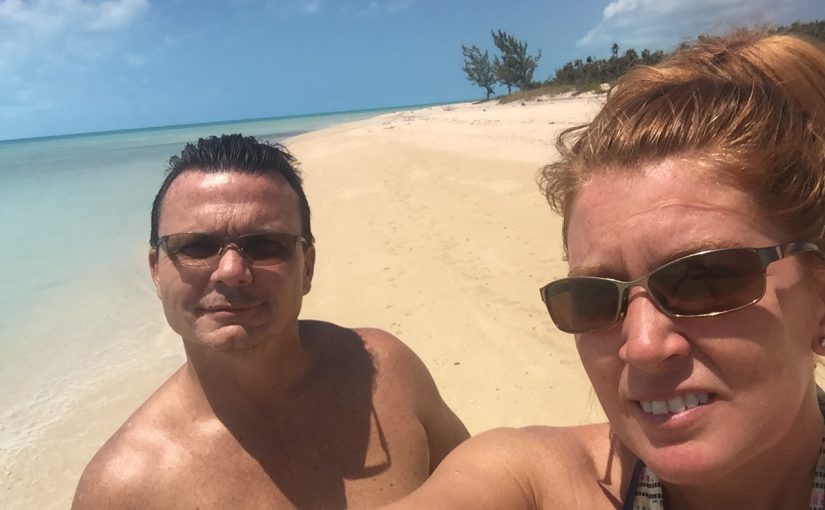 On March 31st, we departed from Georgetown with our friends Bill and Judy, they were on their boat Whisper, and we covered the approximately 45 miles to Long Island.  For us that’s about a ten hour day.  We had heard a lot of good things about Long Island and they all turned out to be true!!

The red pin on the satellite image is Thompson Bay / Salt Pond where we were anchored for the bulk of our long stay in Long Island…..which ended up being about 16 days…..we made one aborted attempt to leave with another of our friends, Mark on Halo, but it turned out to just be too rough that day so we turned back and spent four more days waiting for the wind to die down some more…… 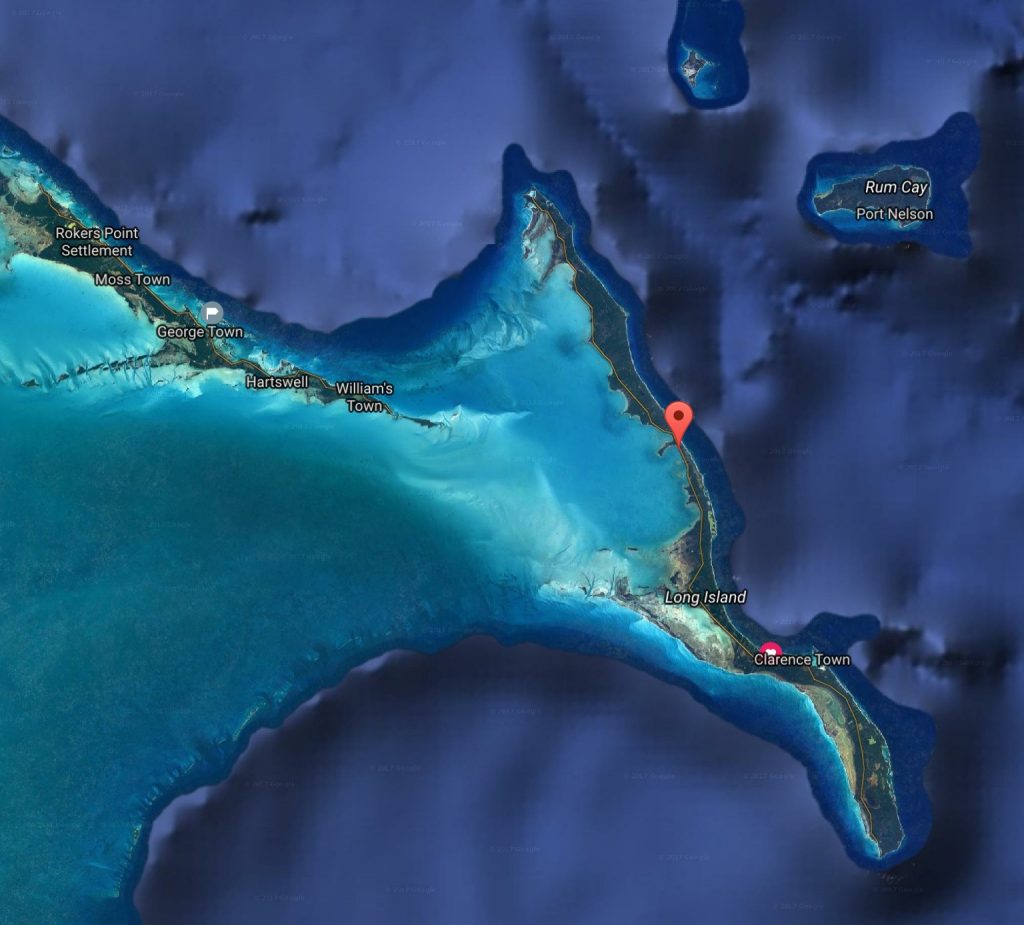 We met a nice Canadian couple, who winter in Long Island, while we were at a local restaurant and we mentioned renting a car to see the island.  The husband said he knew a minister at a local Boys Club who would let him drive us around in their van if we wouldn’t mind making a donation to the organization.  Since we could fit three couples plus our tour guides in the van that was much cheaper than renting a car and we got a free tour guide !!

We have discovered that renting cars in the Bahamas can be problematic.  Bahamians don’t have insurance in the way that we are accustomed to thinking about it.  If they have a wreck and they are at fault, their insurance company won’t pay to fix their car unless they have what they call “comprehensive” coverage (apparently different from the comprehensive we have in the states that covers window glass etc etc)  but it is prohibitively expensive and none of the rental car businesses offer it.  On top of that most rental companies don’t take credit cards so you have trouble making sure you’re covered here.  Couple that condition with our friend’s George Town experience detailed below and you’ll understand why we went the van route.

Another of our new friends (I won’t mention his name here) rented a car in George Town.  He was pulled off to the side of the road trying to get his bearings when an intoxicated local guy hit his rental car head on.  When the police showed up they called the other driver by name and he quickly disappeared from the scene.  Our friend, however, was whisked away to the police station where he was cited.  The whole incident cost him about $300 out of pocket and cost his credit card company $5,000 for the rental car. One day while he was in town walking around he stopped by the police station to try and get a copy of the report for the his credit card company.  The officer, without warning, told him he had to appear in court immediately.  He was obviously not dressed for the occasion.  He was nearly fined for contempt for wearing swim trunks and a t-shirt to court.  Fortunately, he was able to explain he had been given no notice that he was to appear and the judge believed him. It was his intention to plead not guilty, but he was told he wouldn’t be allowed to leave the Bahamas until his trial day ….IN THREE MONTHS…which was beyond his visa expiration.  Thankfully, when he rented the car, he had found a place that took credit cards and they covered the rental car damage, or it could have been much, much worse.  So we decided to put a ban on renting cars in the Bahamas.

The “tour” took us to an old Spanish church with an interesting cave behind it…..the locals call it Shrimp Cave….

my apologies for the odd order of the photos ….they refused to let me rearrange them once I uploaded them this time. 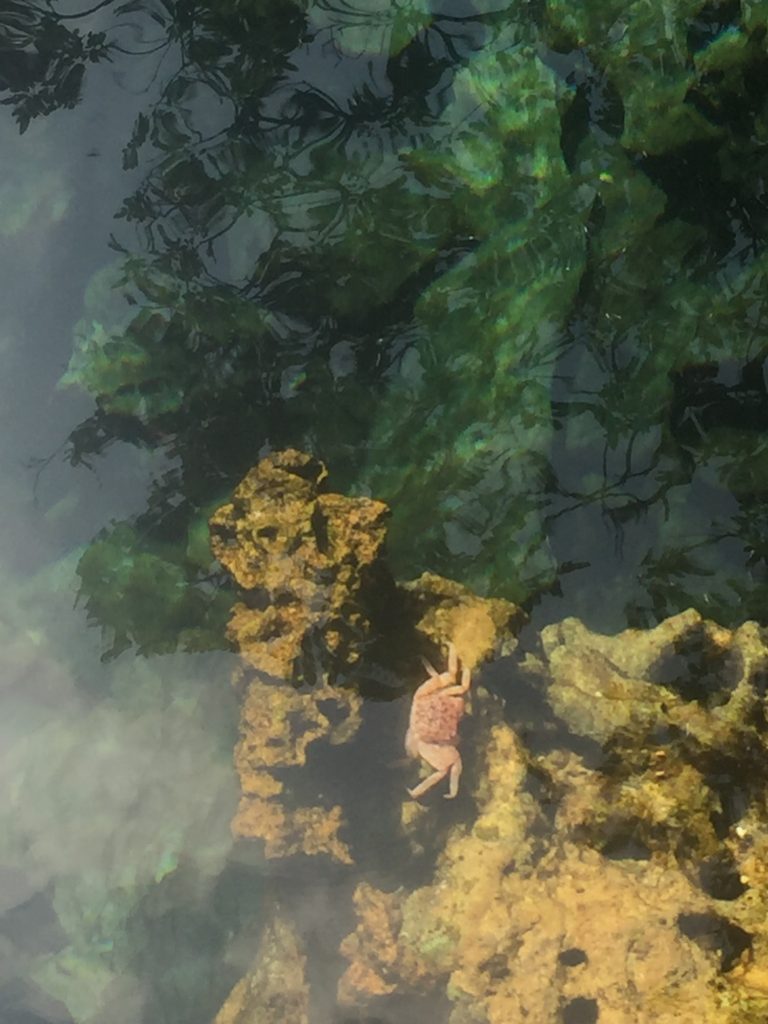 A pink crab in Shrimp Cave….I wonder if he’s pink because of all the Shrimp he eats ? Like a flamingo ?

A stretch of beach on the west side just north of Thompson Bay…. 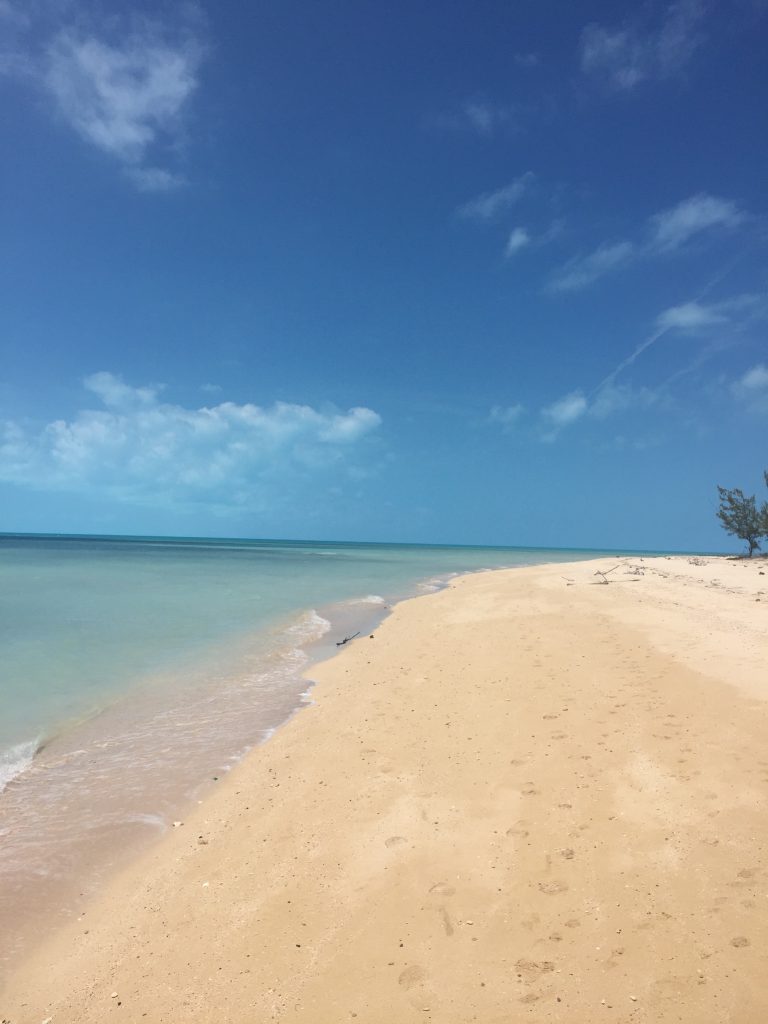 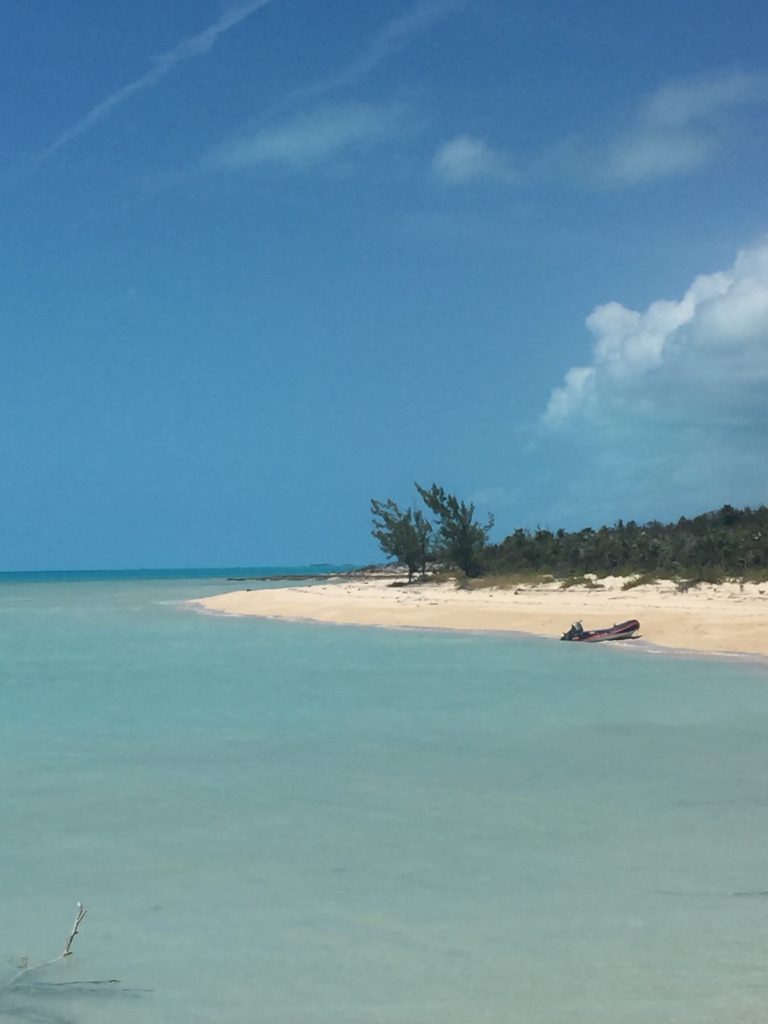 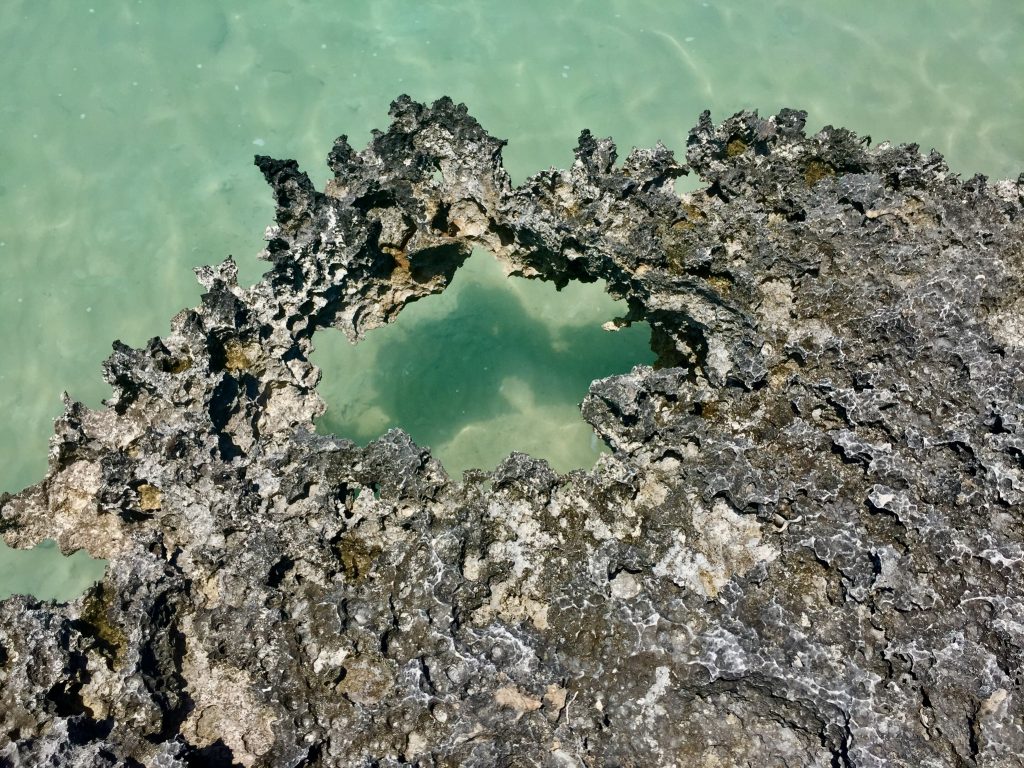 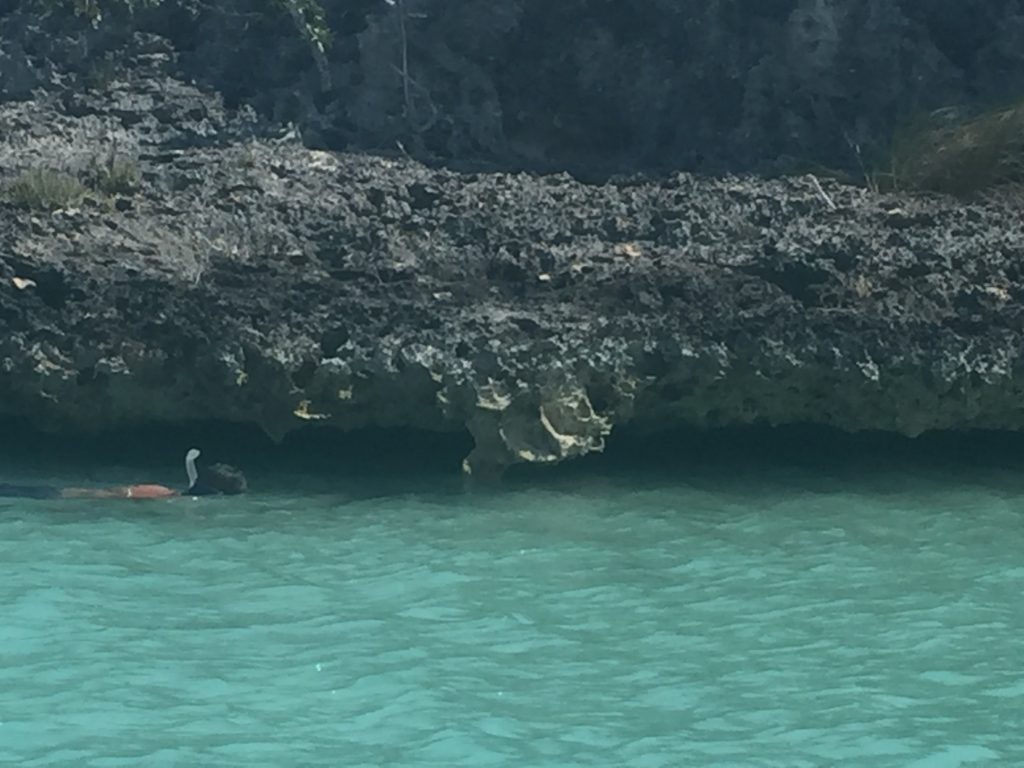 Me hunting for Whelks……

This is the church from our tour ….. 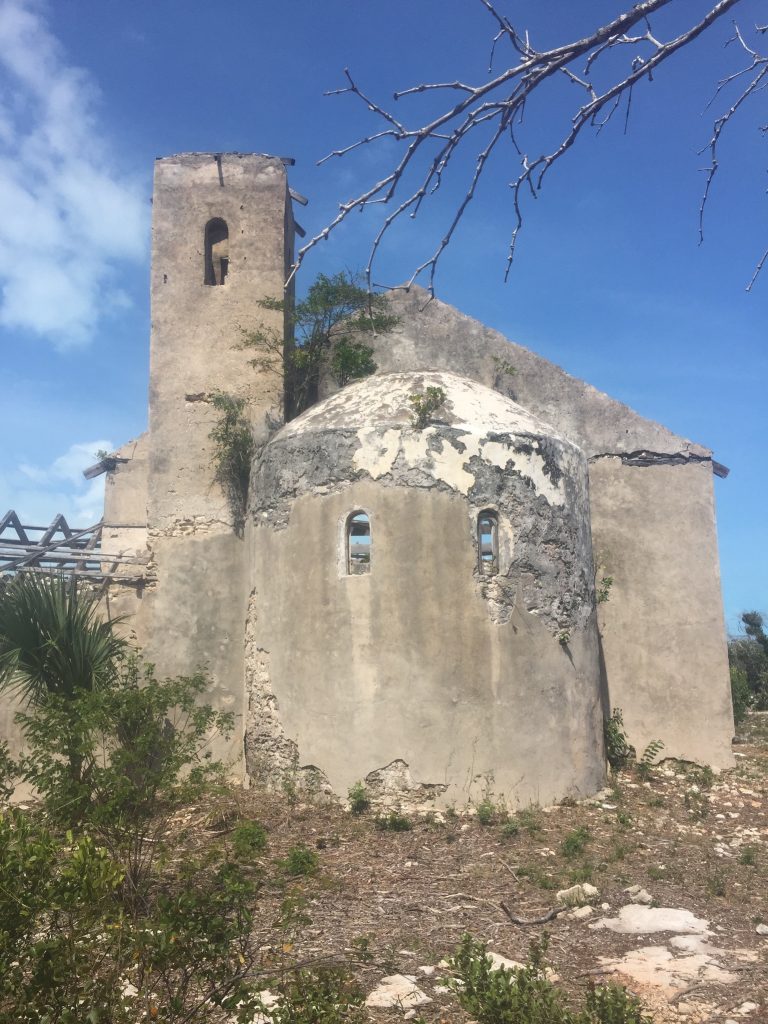 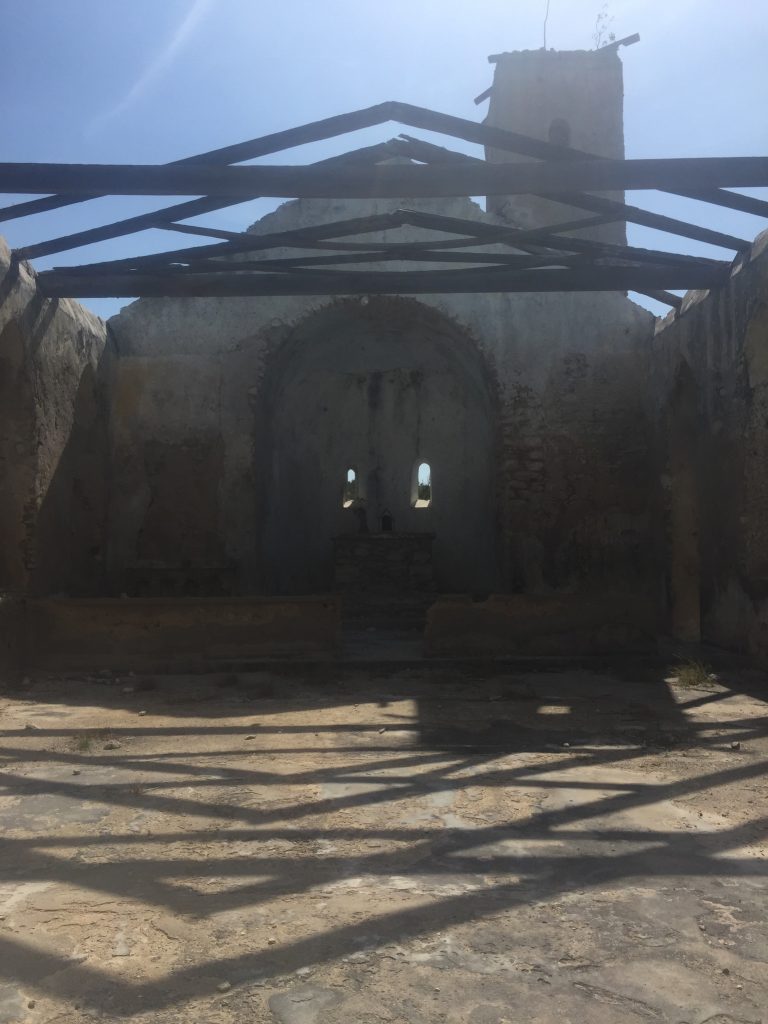 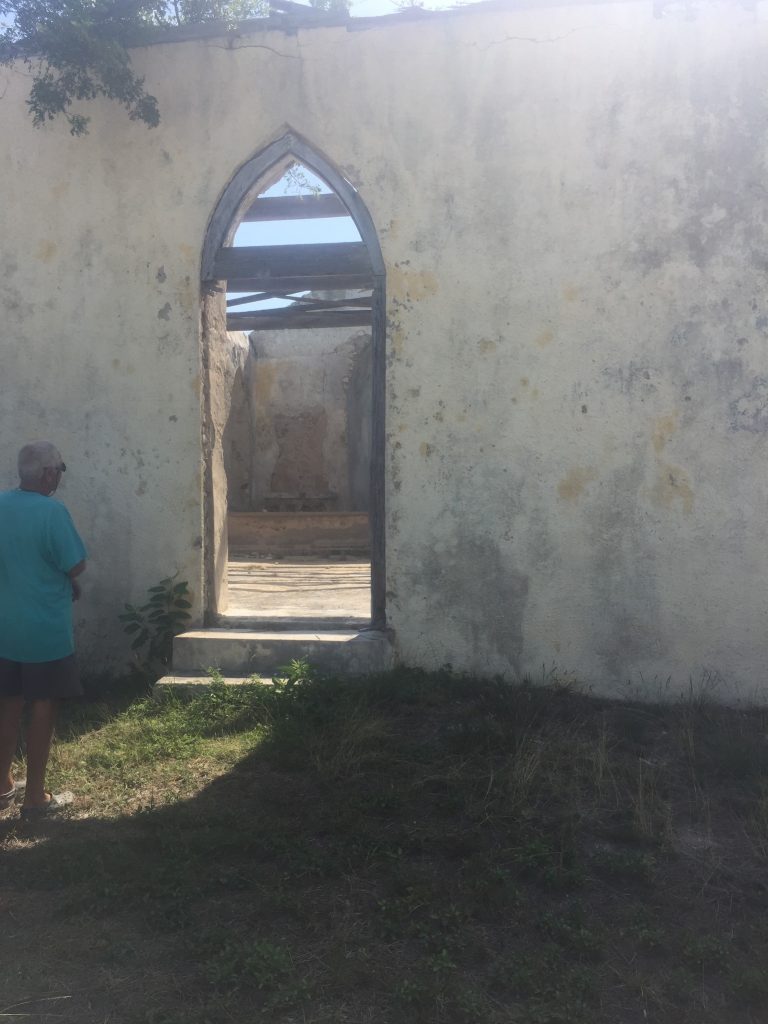 We also went down south a short way to a settlement called Dean’s.  Now here’s an interesting oddity.  In the Bahamas they say “down North” or “Up South”.  It was explained to me that because of the general orientation of the sunrise and sunset it appears to rise, or come “up” in a more southerly direction and go “down” in a more Northerly direction….rather than the map orientations where North is usually up and South is usually down.

Dean’s is the home to the aptly named “Dean’s Blue Hole”….. currently the second deepest documented Blue Hole in the world…..the current deepest known one was recently discovered in China…..at least it was discovered after the sign below was made….. 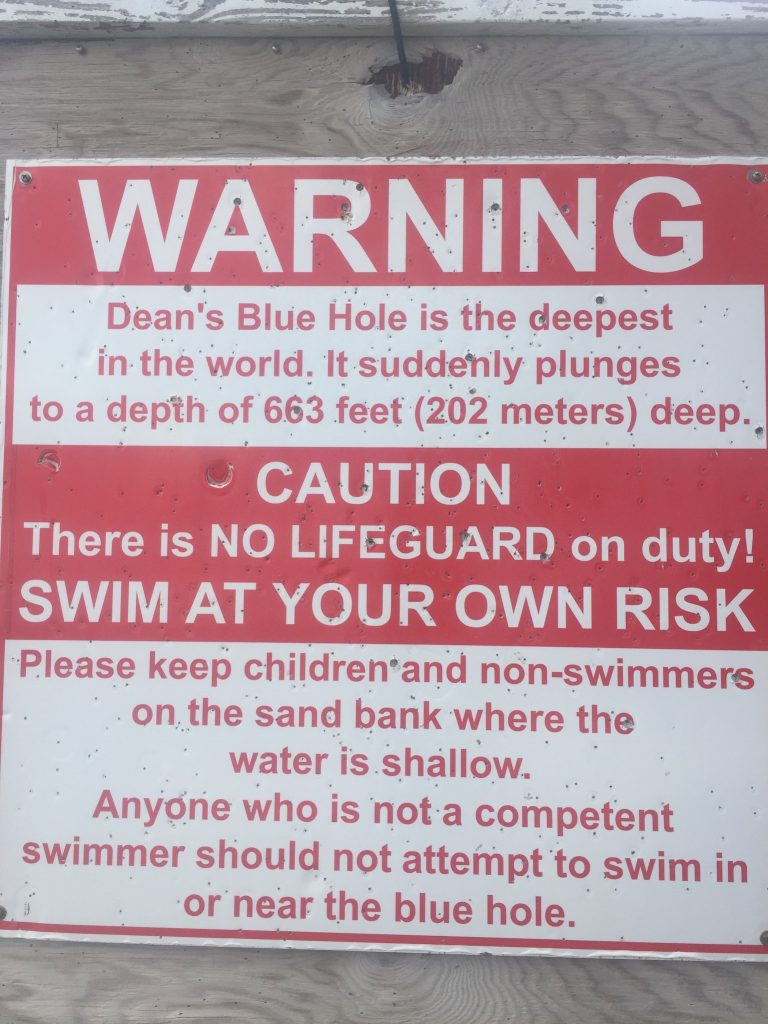 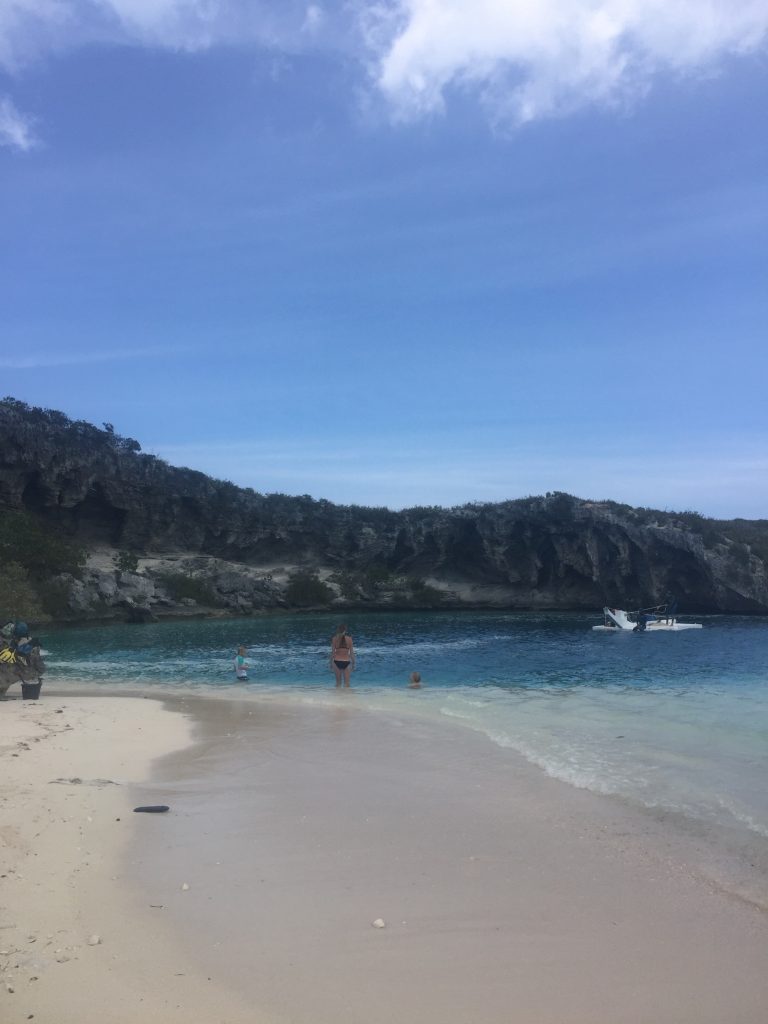 There were some free divers practicing for the upcoming competition.  It was interesting to watch them prepare for the practice dives…… 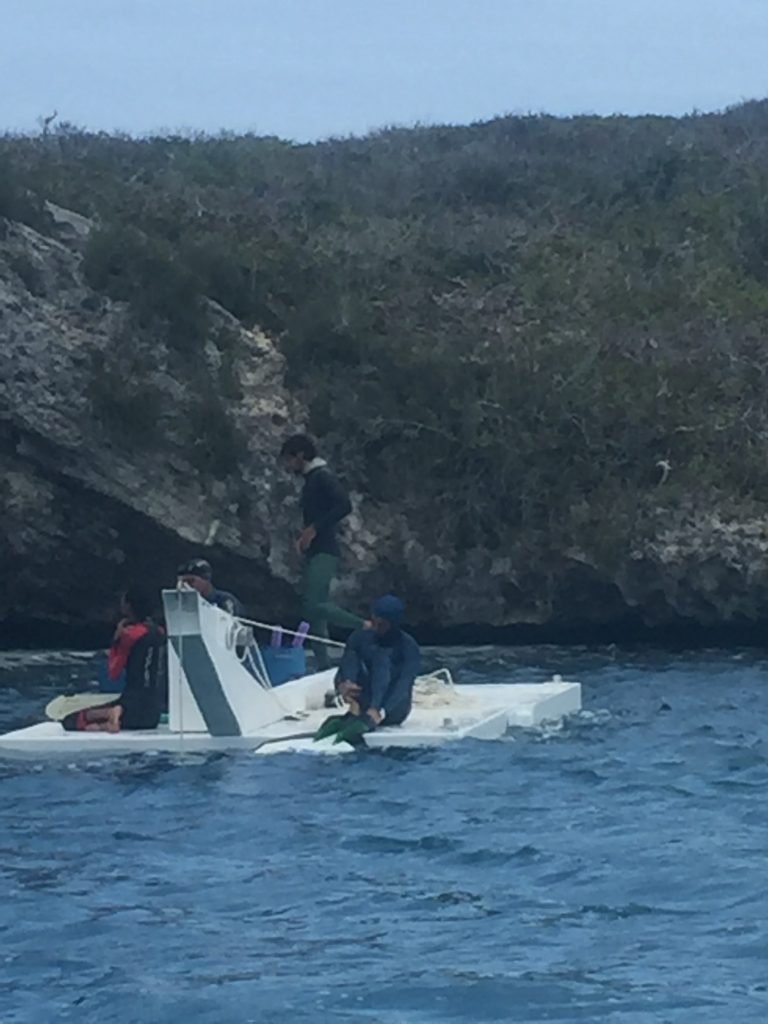 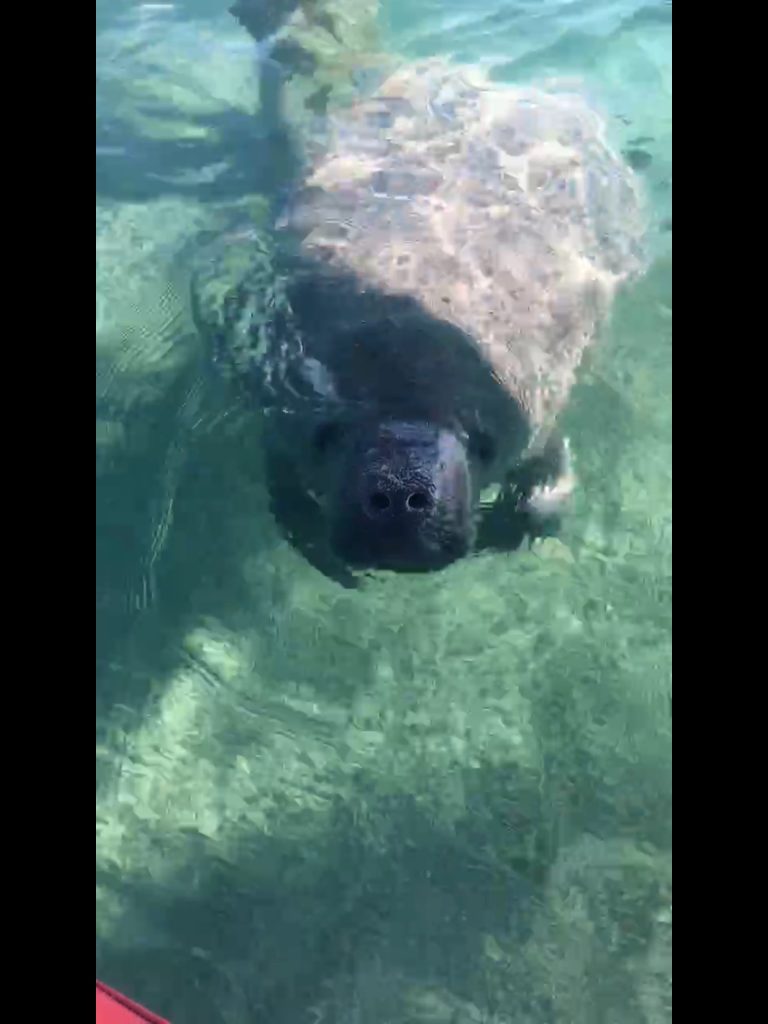 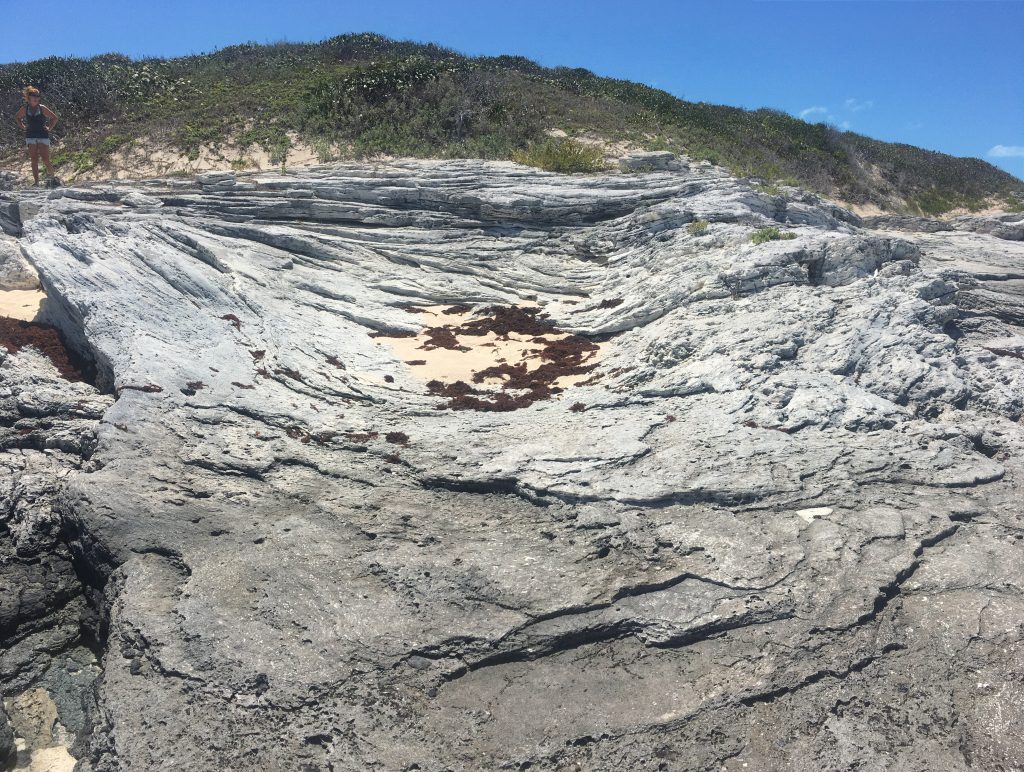 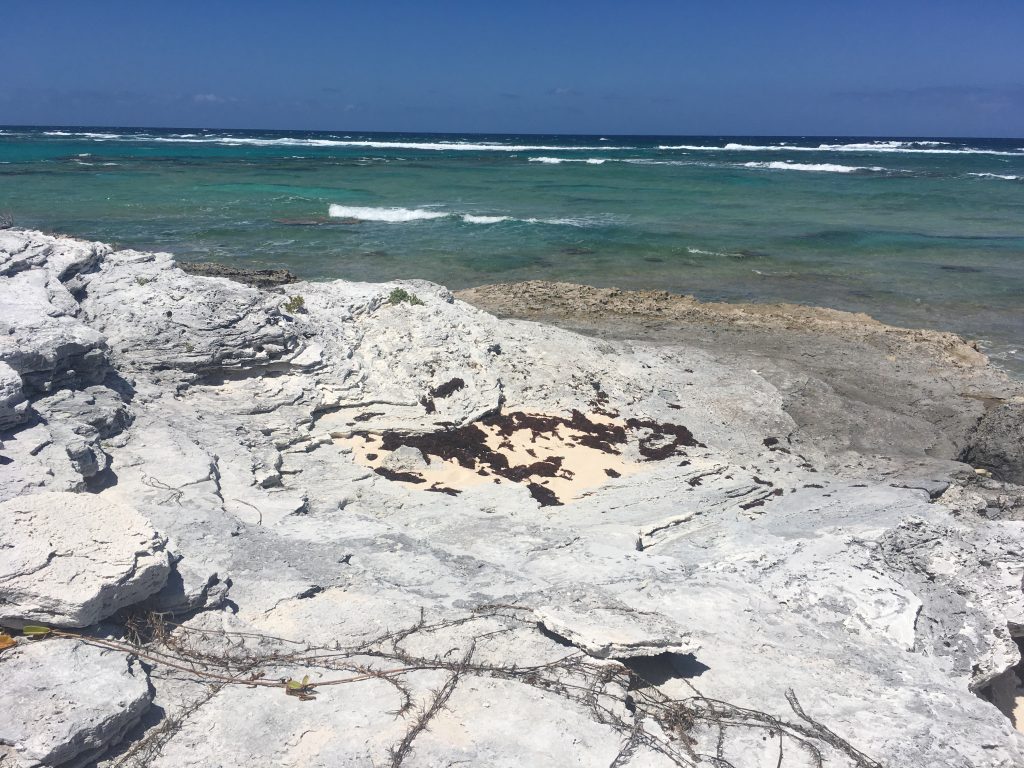 An interesting formation of seagulls….commonly called “gully’s” here in the Bahamas….. 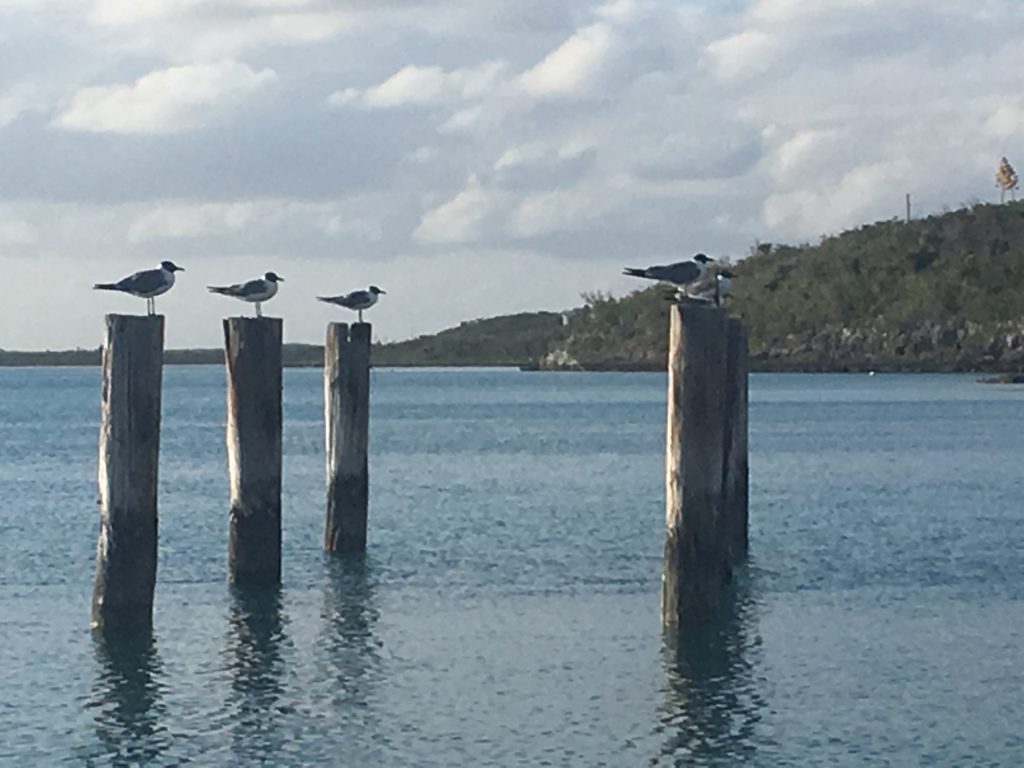 About two thirds of the way as you go up Long Island, there is a resort community that was founded in the 60’s called Stella Maris.  The development was surveyed and subdivided but not much building ever occurred away from the main beach area.  There are a lot of empty lots and some nice isolated hilltop houses in the area.  They also have an interesting salt water pool….why build a pool with all those complicated pumps and filters when you can just cut a channel through the rock to the ocean???? This was one of three pools in the development.  If you own a house here you get resort privileges for about $300 a year.

One of our other stops during our tour was a second cave system called Hamilton Cave…..it is usually a guided tour but the guide was already inside with another group so we just wandered around the main entryway waiting…..we decided happy hour was fast approaching and decided not to wait for his return…..

The caves in the Bahamas are frequently more caverns than true caves as they are open in many places above.  This is generally caused by erosion and tree roots working their way through the ceilings looking for water……some of these tree roots look like bundles of telephone poles….. 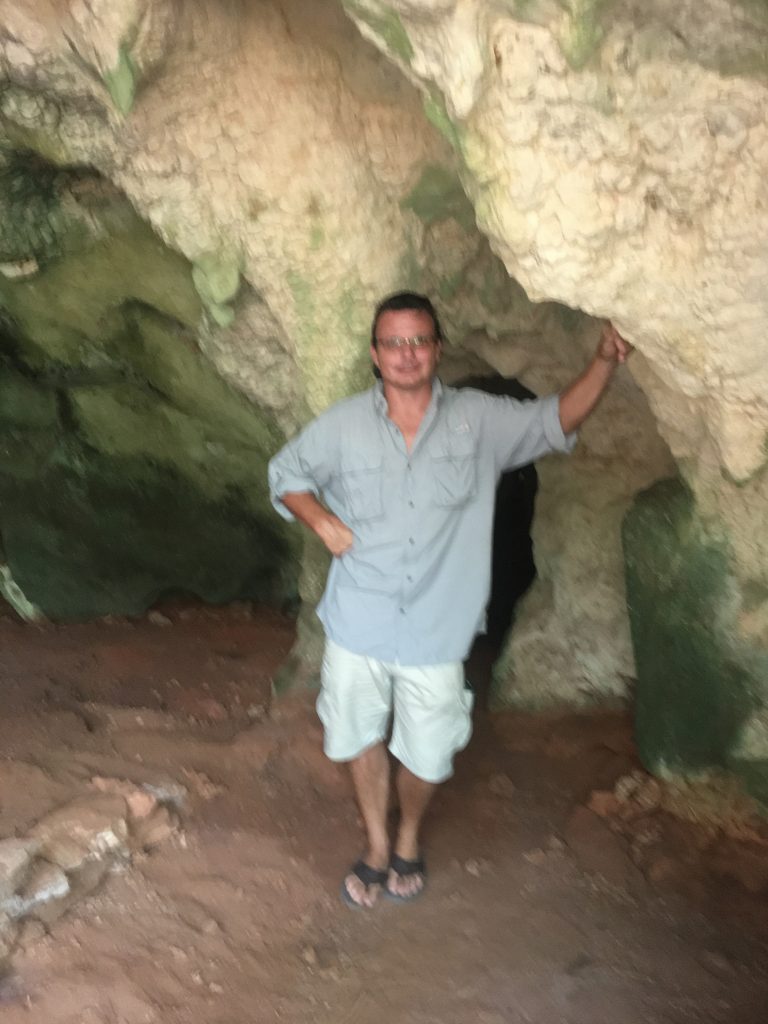 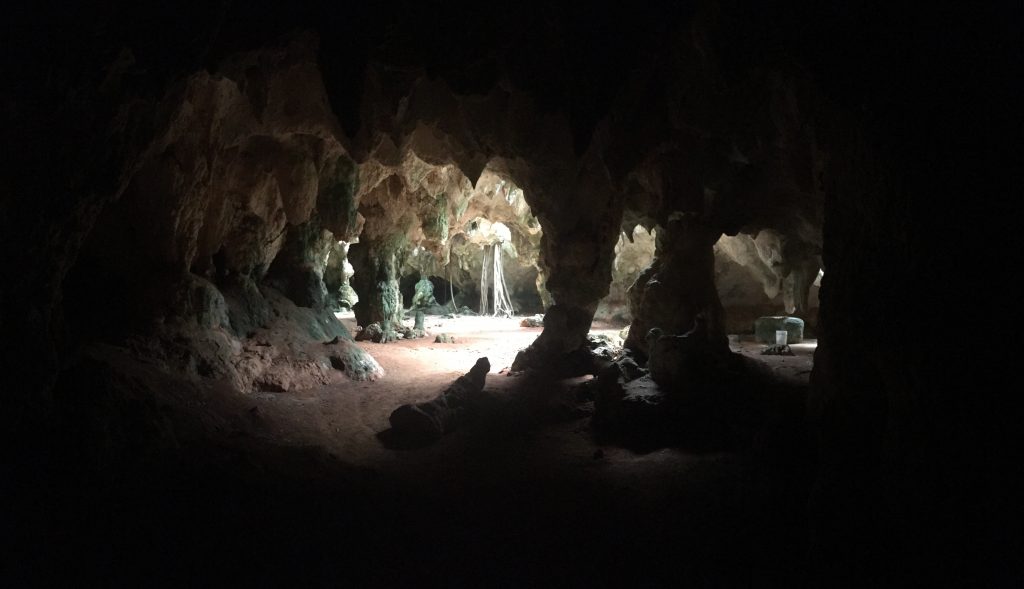 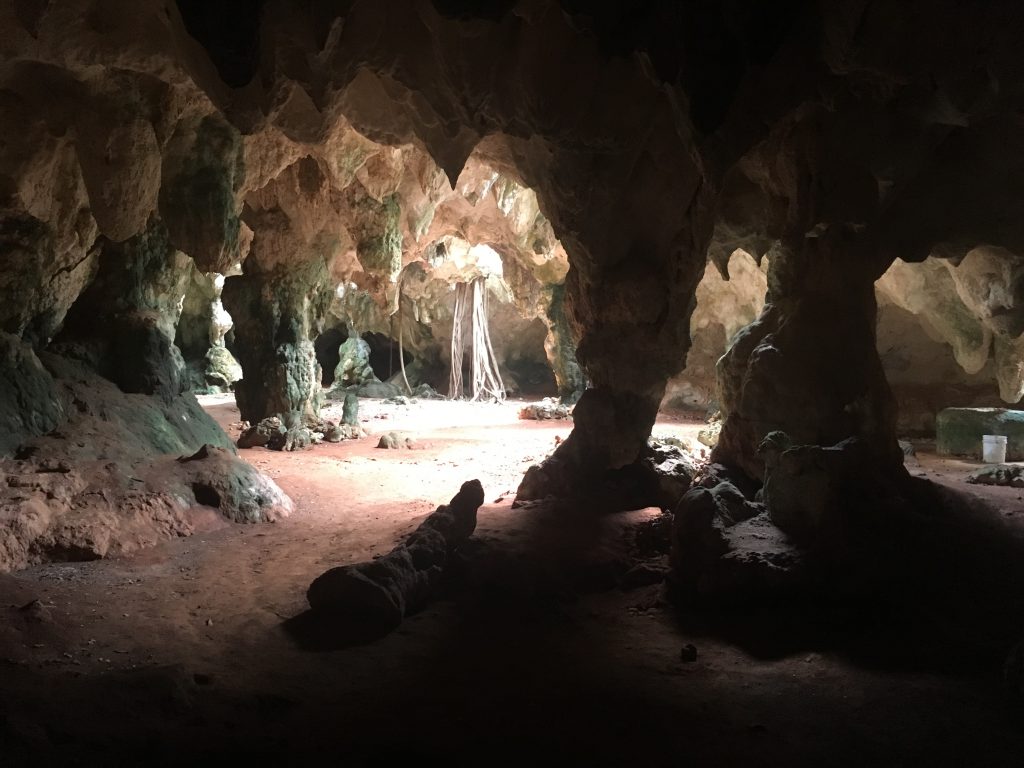 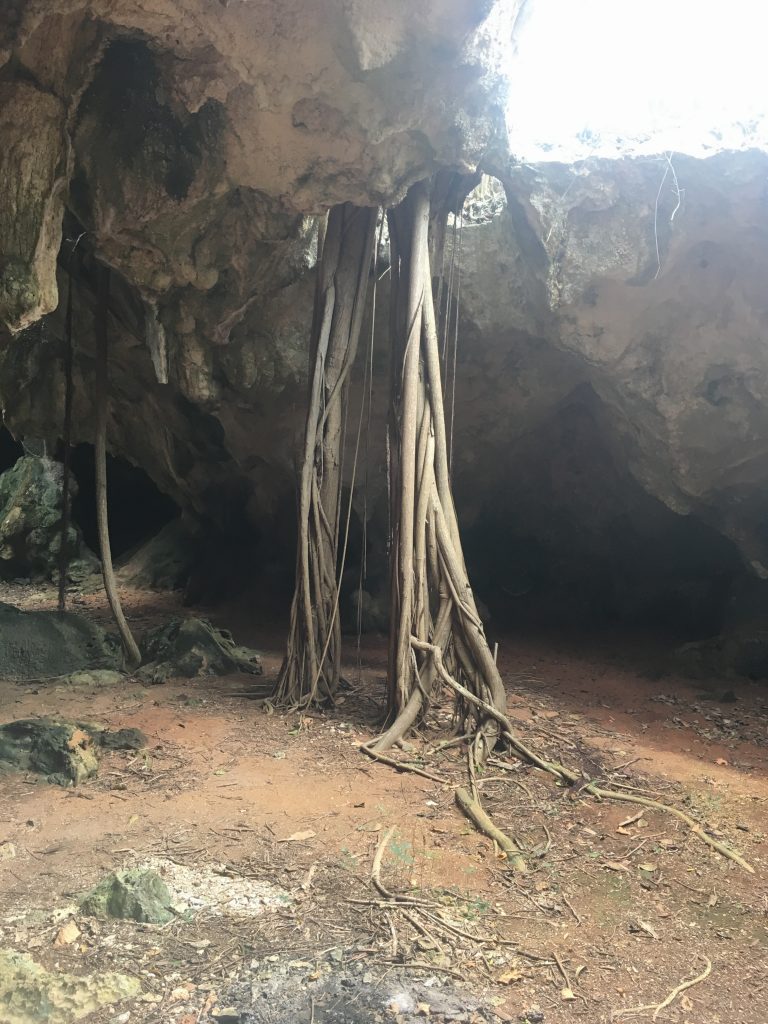 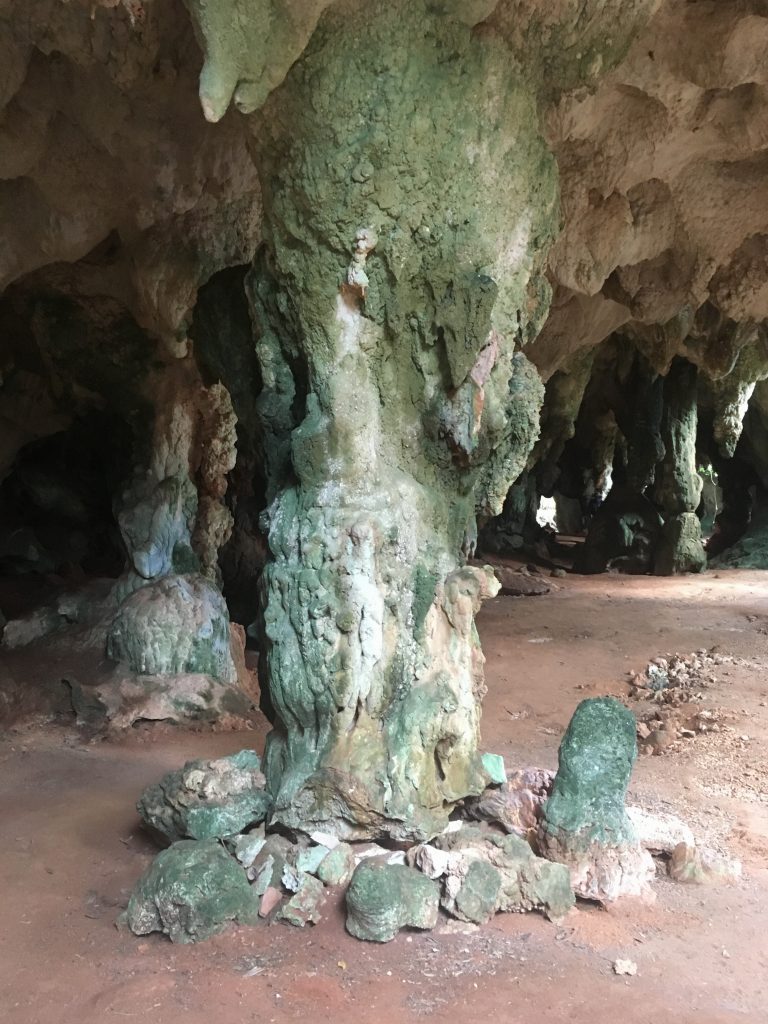 Another shot of Dean’s Blue Hole

The below photos are actually Shrimp Cave but somehow they wouldn’t stay in order as I was writing this post….. 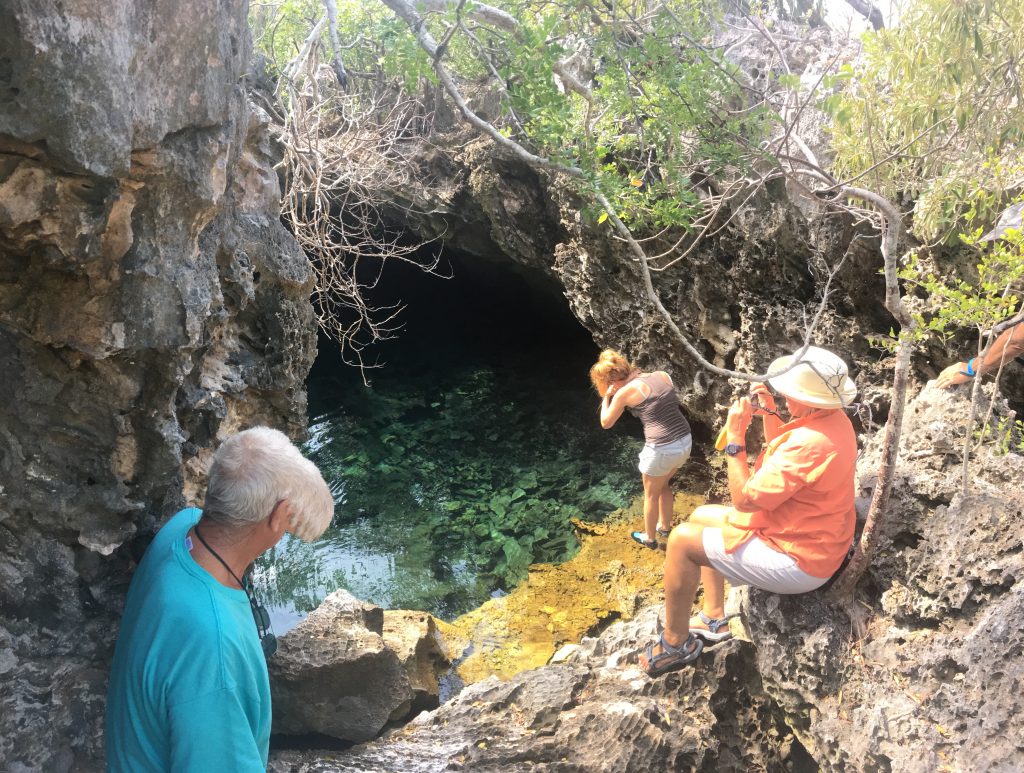 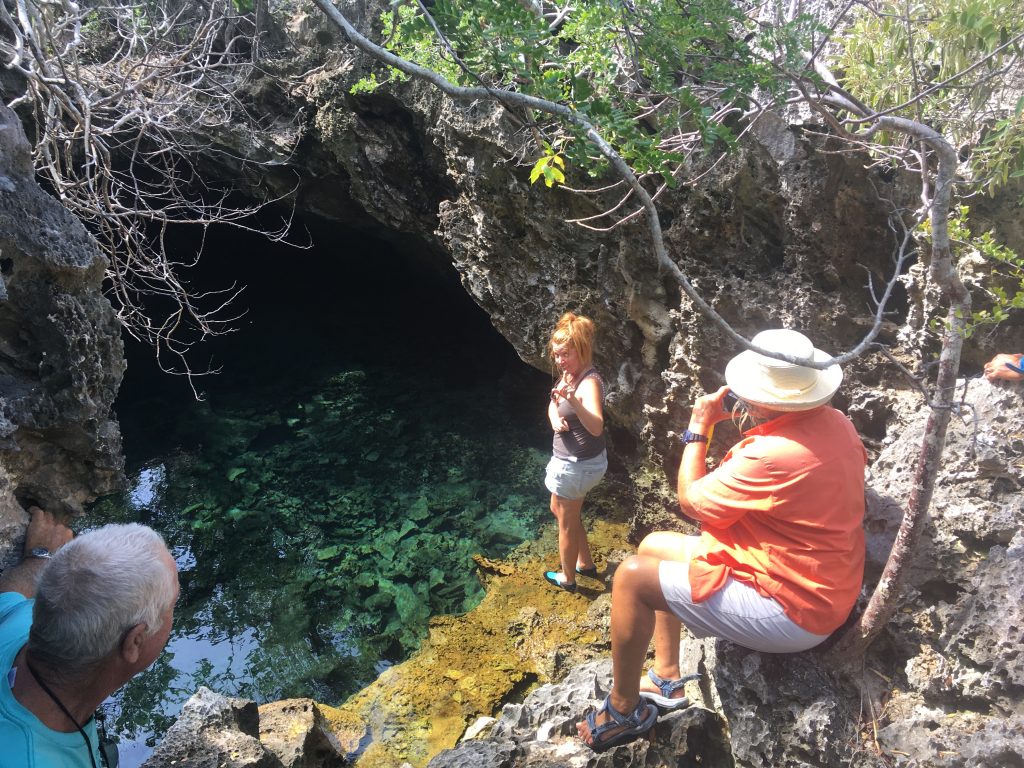 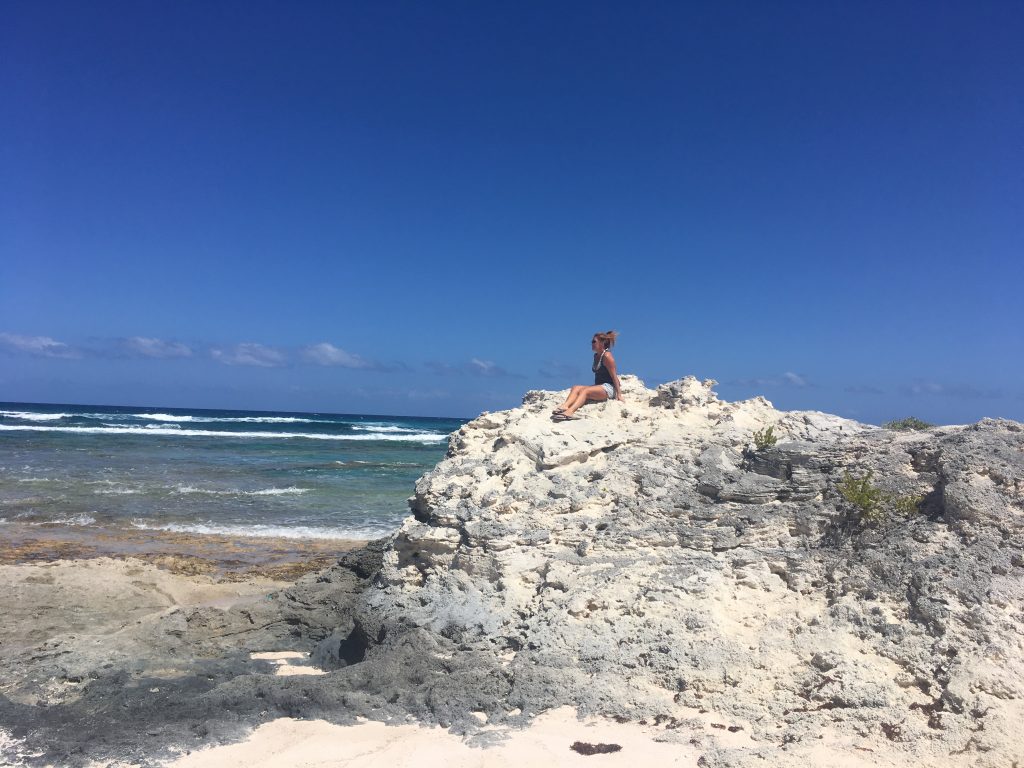