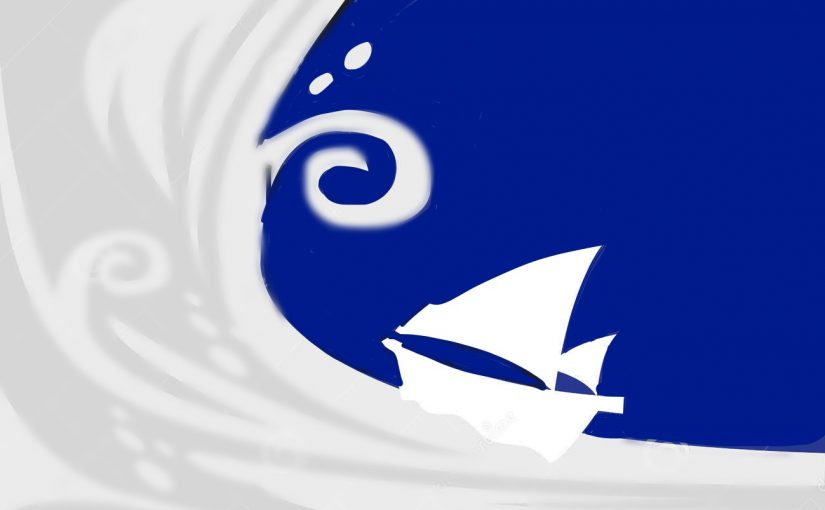 1) A big hats off to Mantus Anchors….

2) A reminder to not skimp on ground tackle

3) and that preparation is the key to safety and a modicum of peace of mind when the fecal matter hits the air moving device…. 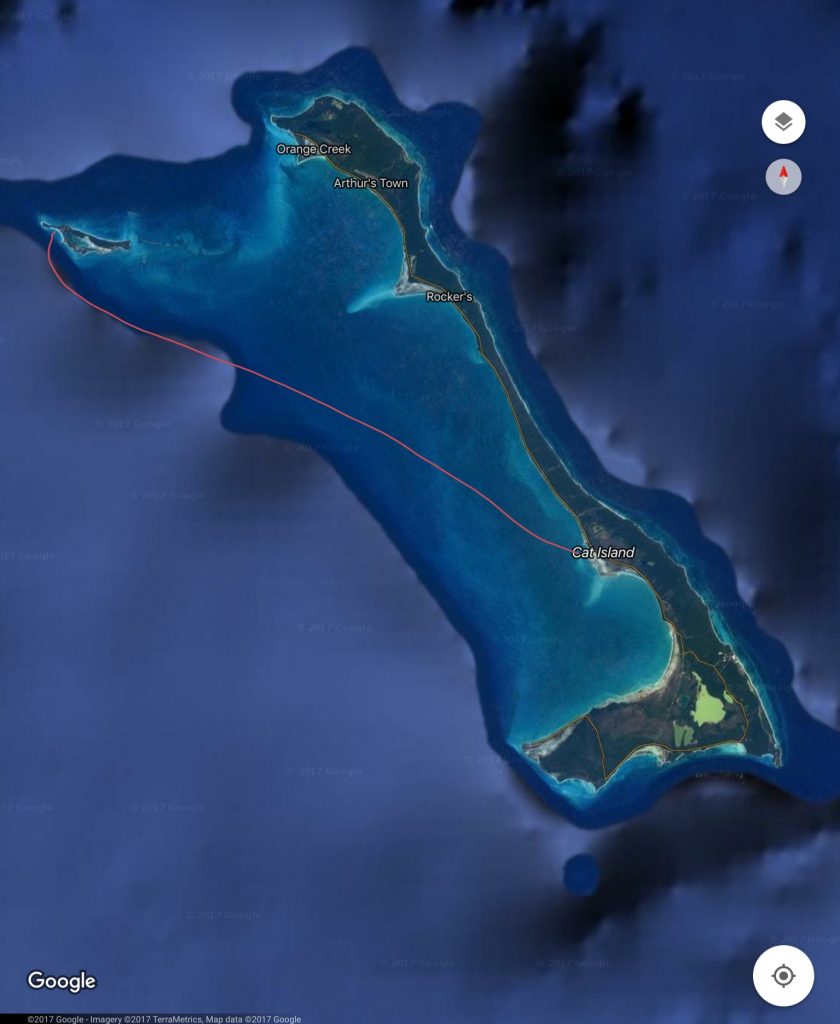 We departed Fernandez Bay and made our way to Half Moon Harbor at Little San Salvador, which is also known as Half Moon Cay.  Little San Salvador is a private Island owned by Carnival Cruise Line.  As such, it has a fake beachside village, what appaeared to be a fake pirate ship, a real water park, and one or two cruise ship priced restaurants. As a cruising boat, you can visit the island once the cruise ship has departed, as long as you radio ahead and get clearance from the island manager. Some reviews also mention visiting the bar if you get in before the staff leaves.  They  bring the staffing in every morning from Eleuthera and take all but the resident employees home every evening.

We had researched the cruise ship schedule and we knew that a cruise ship was leaving around 3:30pm on the day we arrived and that another would be arriving around 9am the next day.  This wasn’t going to be an issue since we were planning to be underway at 6:30am.  We had a very smooth trip to LSS and the cruise ship departed just as we were approaching the anchorage. We had seen some forecast chatter about scattered squalls, but in the Bahamas it seems like if you let that stop you, you’ll never go anywhere.

In the below image you can see a closeup of the anchorage and the pin is approximately where we were anchored, about 300′ off the beach in 12′ of water. When we are in an uncrowded anchorage, or alone in one,  we always put out 10 or even 15:1 scope (that’s the length of chain in relation to the depth of the water in which you are anchored.)  Thank goodness for that habit….we have 300′ of 3/8″ G43 chain on our primary Mantus 85 pound anchor……we went a couple of sizes over what’s recommended on the anchor and thank God we did. 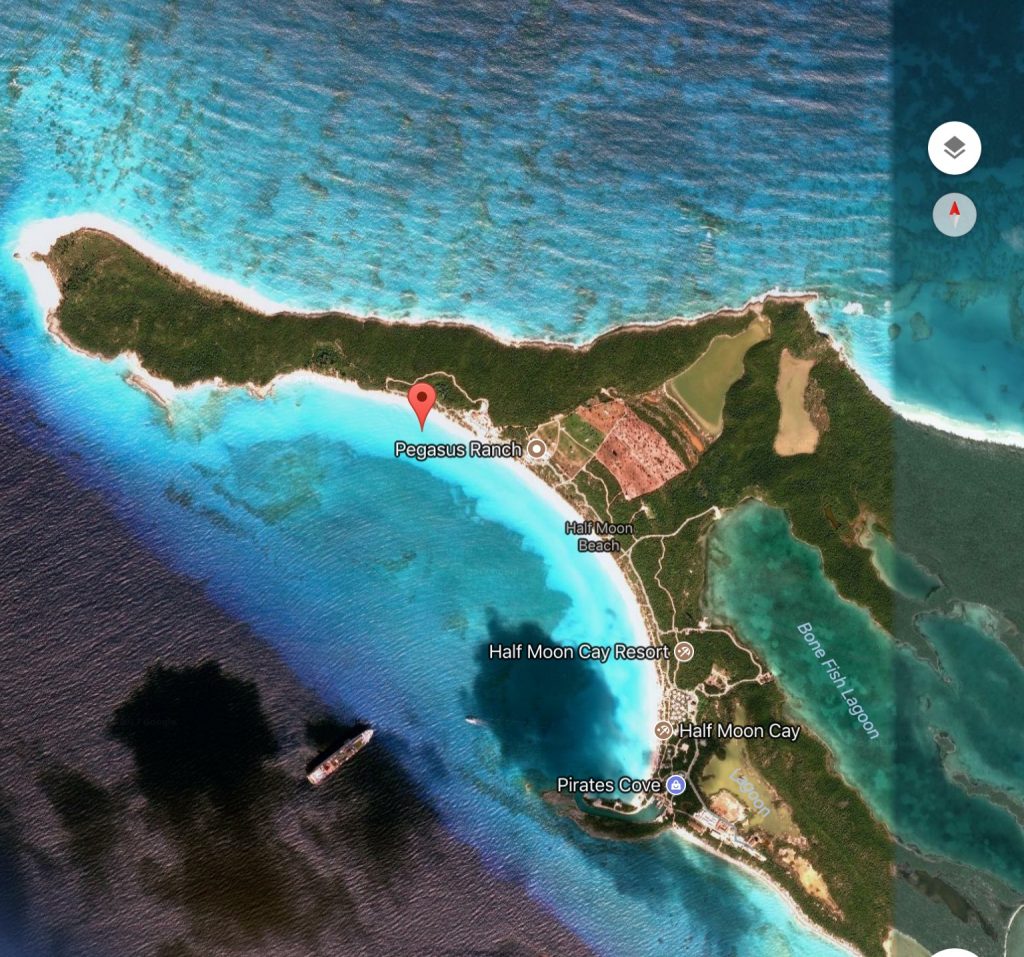 It was a little bouncy overnight as the actual wind was more southerly than the forecast wind was anticipated to be, so the wave action was a little choppier than what is comfortable.

Around 5:30am I was awakened by some thunder and the feeling of the wind rising.  At about 6:30 the wind was rapidly increasing, rain began to fall, and the wind had reached about 40 knots and was gusting to just above 45kts.  This was NOT going to be fun…..

The wind was coming out of the West-Southwest so there was nothing to reduce the wave action being generated by the wind.  We usually count on an island, shoal, reef or other shallow feature to diminish the waves.  There seemed to be two cells moving southeast and we were catching the edge of the first one and we got the brunt of the second one as it passed.

After the first hour, I had sent out a few text messages to let people know we were in a potentially bad circumstance.  In the second hour, I knew we were in a bad spot but I wasn’t sure how bad it was going to be.  We began taking 10-12′ waves and some of them were breaking over the bow of the boat.  We were riding up 10-12′ waves and then crashing into the trough behind the wave, then taking the ride up the next wave which would drive the swim platform down into the back of the passing wave and it hit hard, sounding like a bomb every 10-15 seconds.  Kim was motion sick and in the aft cabin.  I was sitting in the cockpit waiting for the anchor to drag and to be forced to decide if we were going to hope it reset before we grounded on the beach, or fire up the diesel and try to power beyond the waves and into deeper water pulling up the anchor as we went and maybe get broached by an incoming wave and still end up on the beach. Either choice had its risks.  Even if the anchor held, we had to be worried about an unusually deep wave trough slamming the keel on the bottom and possibly damaging the rudder. We had anchored in 12′ feet of water but didn’t anticipate 10-12′ waves which could have included troughs deep enough to make our rudder reach the bottom.  We were lucky that didn’t happen.

We had recently purchased a new 15hp outboard in George Town ($2500) and since it had been very calm the prior day and evening we towed the dinghy with the outboard still attached.  That proved to be a slight error in judgement.  I’ve read many stories about people who have towed their dinghies with outboards around the world with no issues….just our luck we wouldn’t make it through one season in the Bahamas towing ours.

Around 8:30am, during a few particularly violent and shifting waves, our dinghy flipped over……our dinghy anchor, one oar, a dinghy pump were adrift and our dinghy chaps (material coverings designed to reduce the UV damage to the inflatable tubes), were ripped.

Around 9:30 the second of the cells moved off a little to the southeast.  Kim rallied and we managed to go out onto the swim platform and flip the dinghy over.  It was a momentous piece of teamwork.  I donned my snorkel gear and recovered our anchor, but the pump and the oar were long gone.

Shortly after that, the waves subsided and we were in the lee of the arriving cruise ship.  We started the diesel, raised the anchor and motored out of the anchorage and were on our way to Eleuthera after about four hours of the worst time on a boat that we have ever experienced…….wondering “why, exactly, are we doing this?” 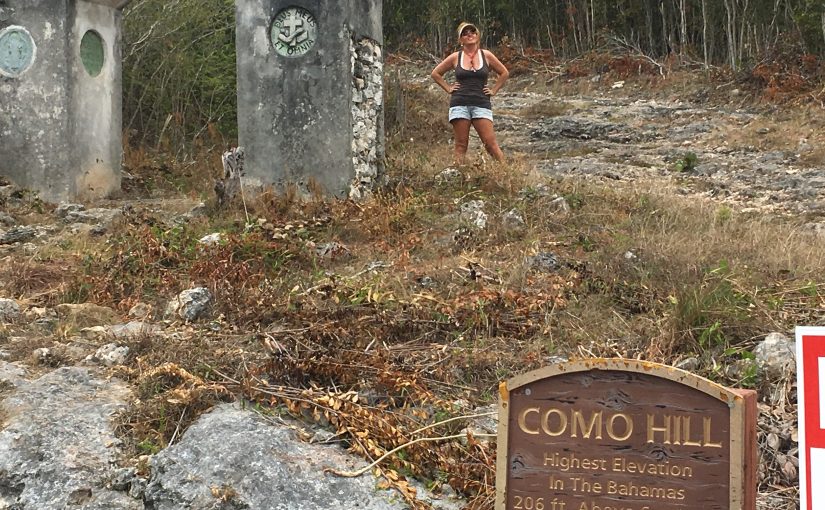 Our next stop after our long stay in Long Island was for a short stay in Cat Island to the North.  Cat Island is typical for this stretch of the Bahamas, in that, it is a long, slightly curved piece of land that runs generally southeast to northwest and has little protection from the West and few or no anchorages on the east side.  That makes Cat Island a tough place to linger unless you don’t mind having some rough nights at anchor.

Cat Island has its share of “boiling holes” (lakes that connect to the ocean through a series of caves and caverns) the interesting thing about the lakes here is the variety of local superstitions and folklore about the denizens of these lakes.  One has been rumored to be the home of Mermaids, while another, home to a sea monster, due to bubbles and burping sounds caused by the tides. Dead animals dumped into the lake would also be drawn into the caverns by tidal changes and would sometimes wash up on the oceanside beach, which was credited as the activities of the sea monster.

We anchored in an area called the “New Bight” which is just south of the “Cat Island” label on the satellite image.

That area is well known for the Hermitage, a monastery designed and constructed by a Franciscan priest named John Cyril Hawes, (1876-1956).  Hawes, was an architect who designed and constructed church buildings in England.  Hawes became a Franciscan reverend and from 1903-1911 was posted to a church in the Bahamas.  Hawes left the Bahamas (and the Franciscan church) in 1911 and spent several years in the United States where he roamed the country and worked different jobs.  Hawes converted to Catholicism, studied to enter the Catholic priesthood in Rome and was ordained in 1915.  He worked in Australia until 1939, when he retired from the church, he returned to the Bahamas and constructed the Hermitage.  It is unclear why he was commonly referred there to as Brother Jerome. He was buried in a cave under the Hermitage following his death in 1956.

It is an impressive structure, located on a hill originally named “Como Hill”.  It was renamed Mt. Alvernia in honor of La Verna hill in Tuscany and is the highest point in the Bahamas. 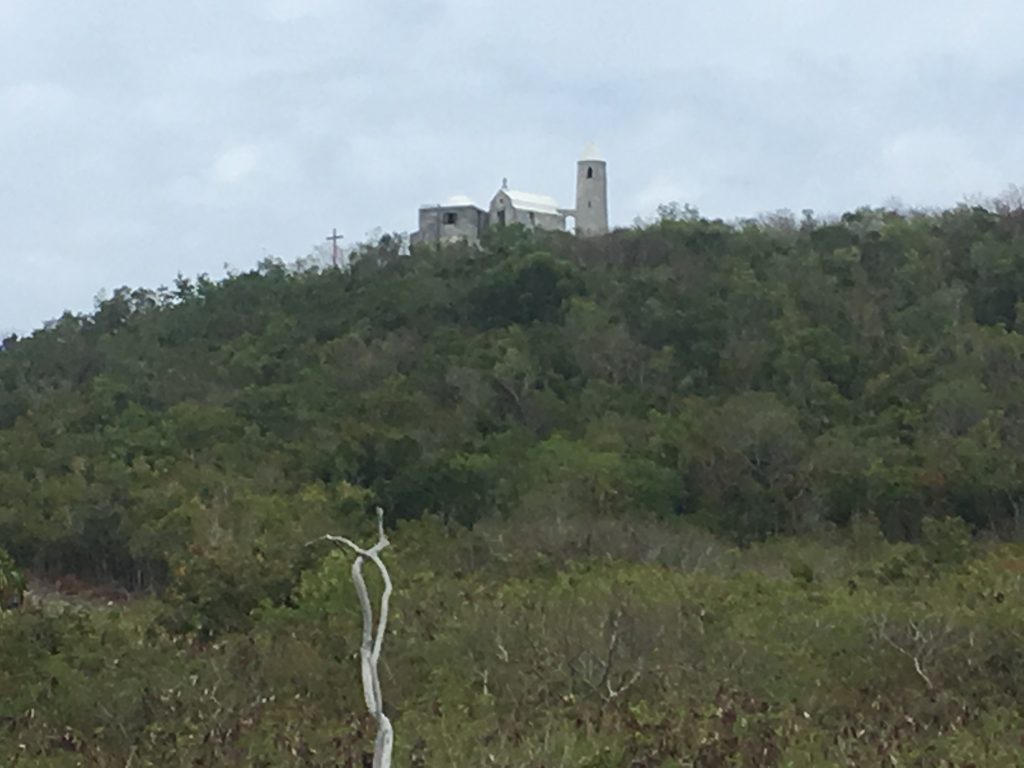 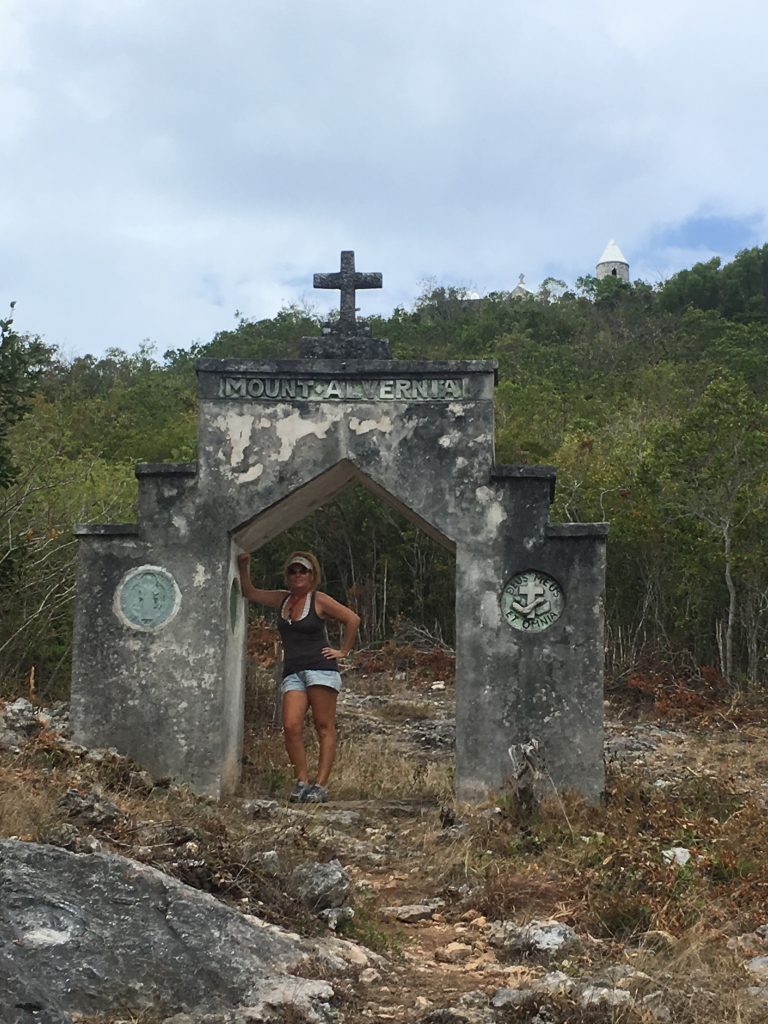 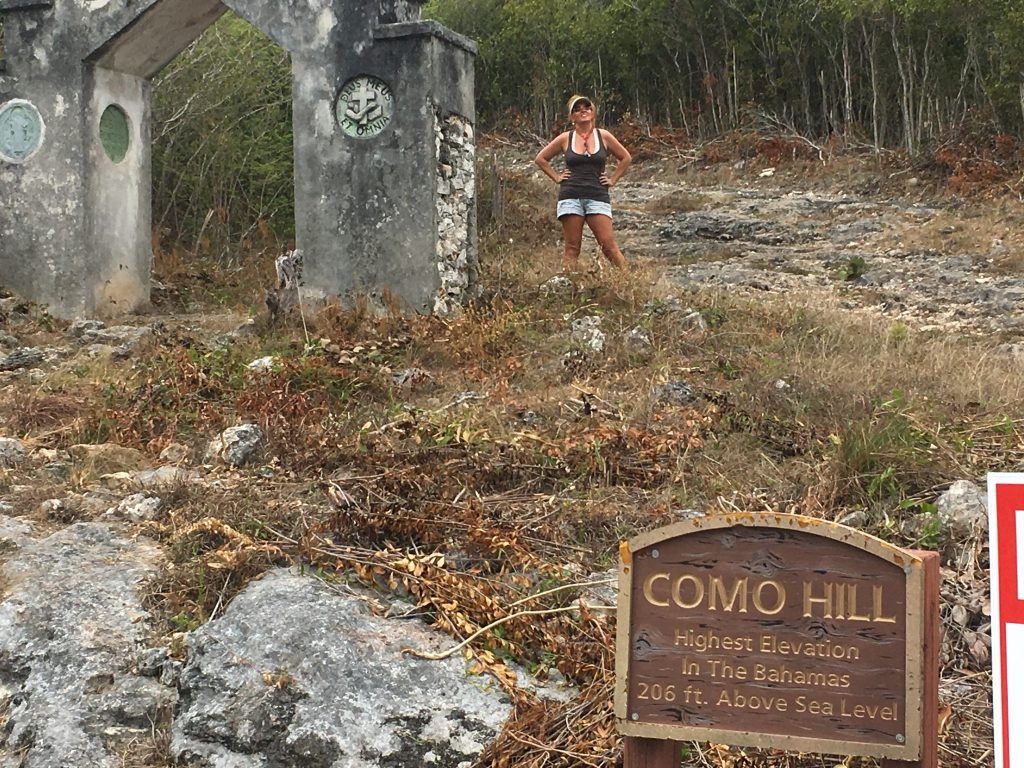 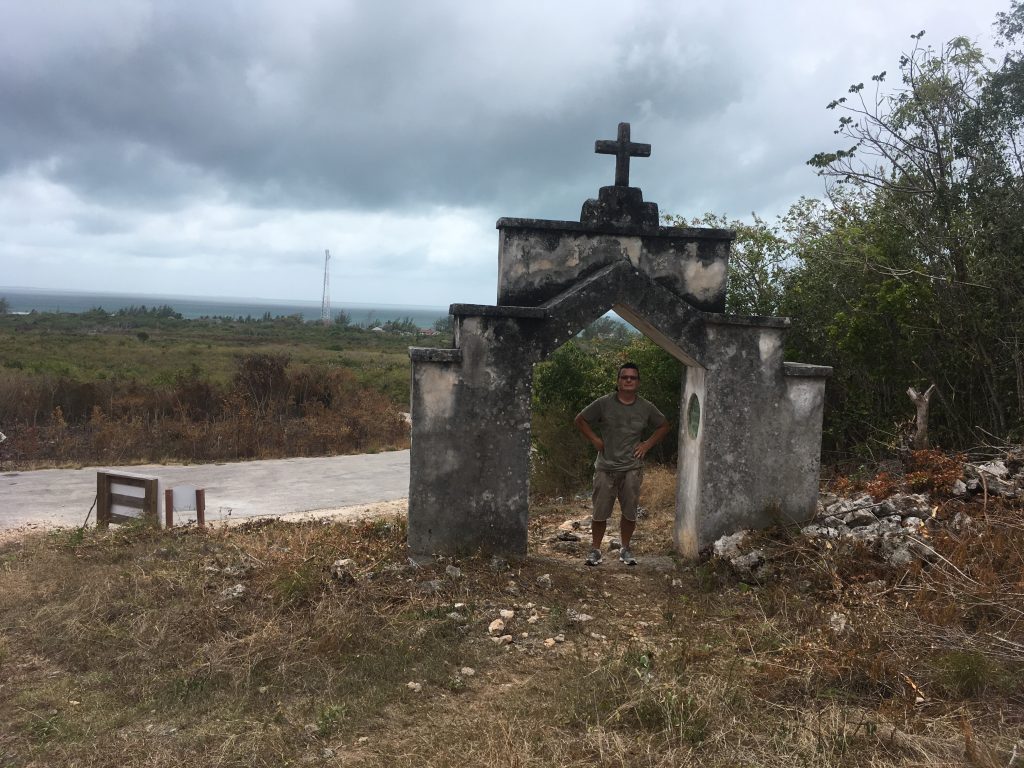 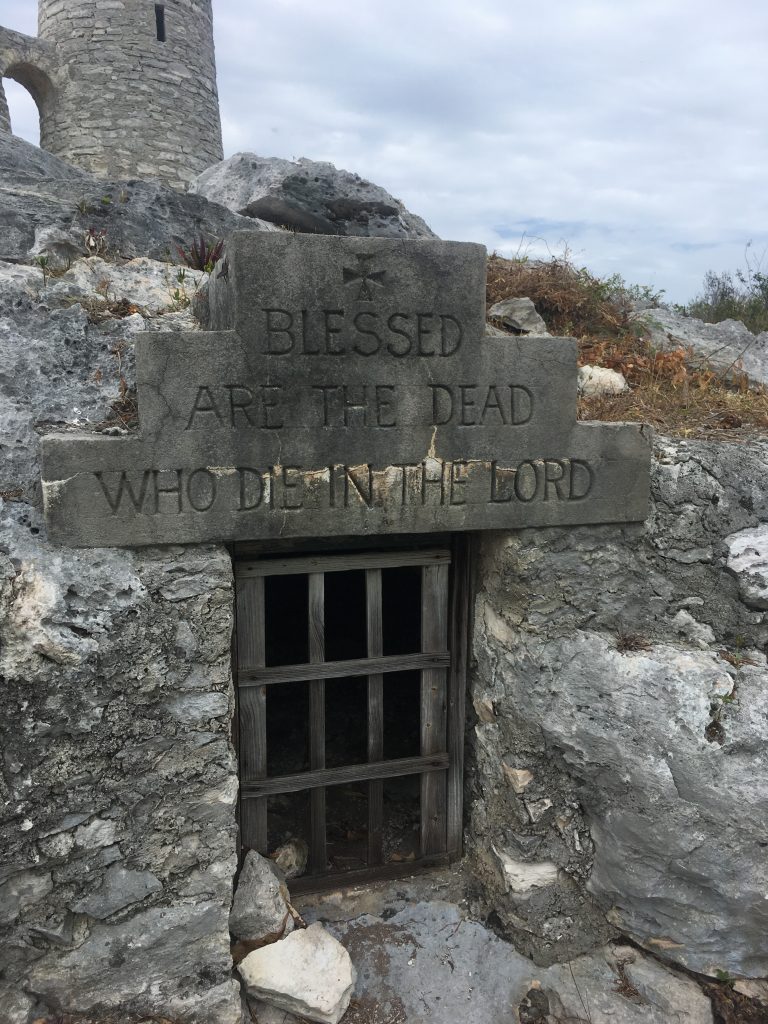 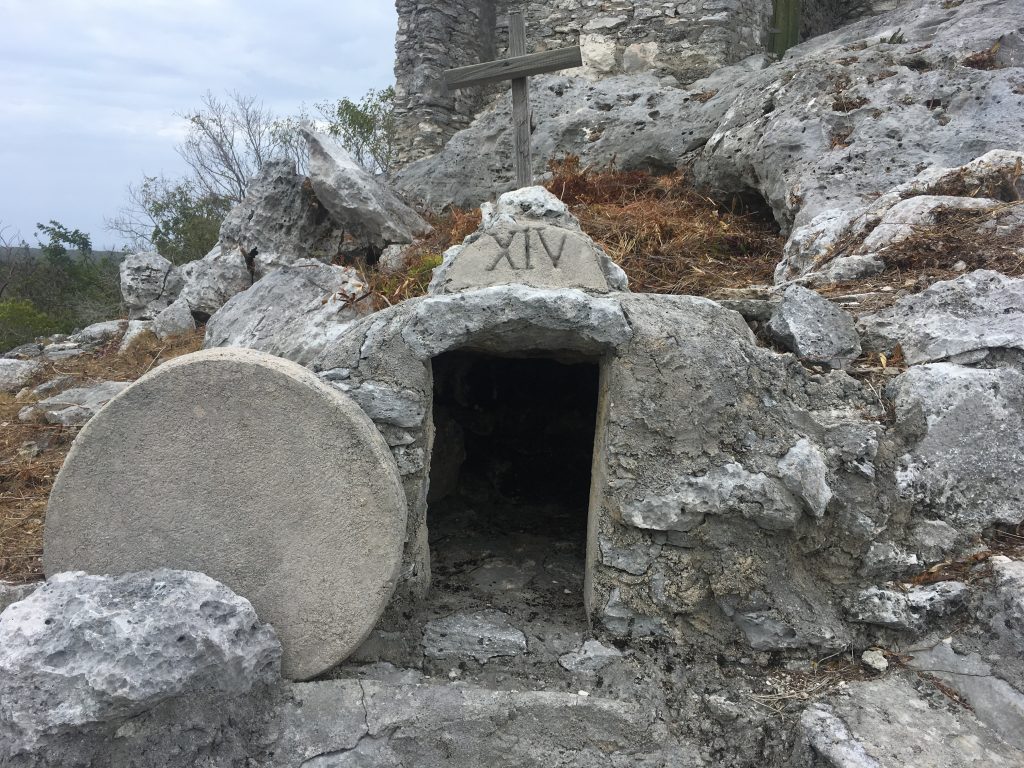 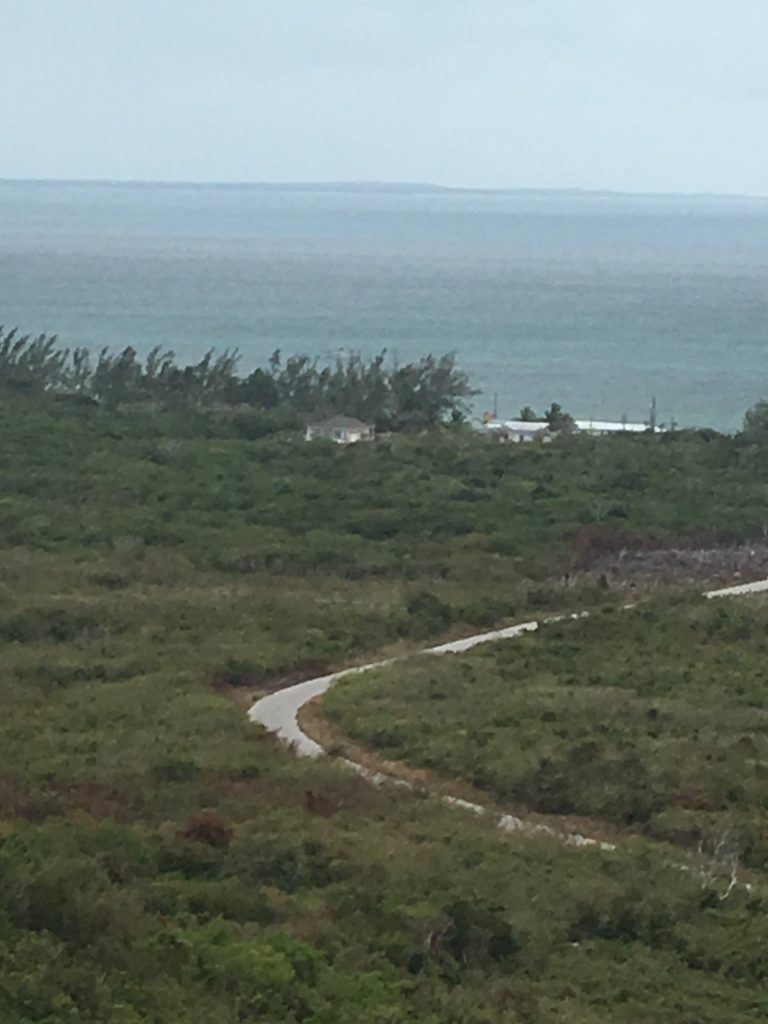 If you look closely….you can see the blurry image of Kitty Hawk behind the white house…this was the view from the Hermitage. 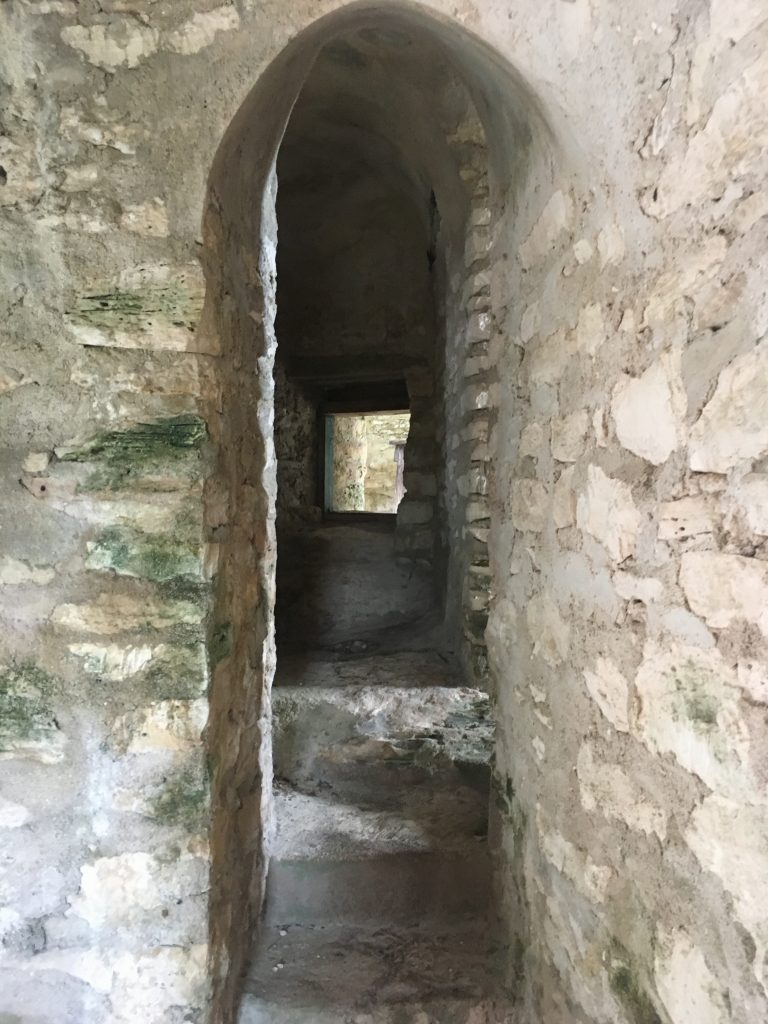 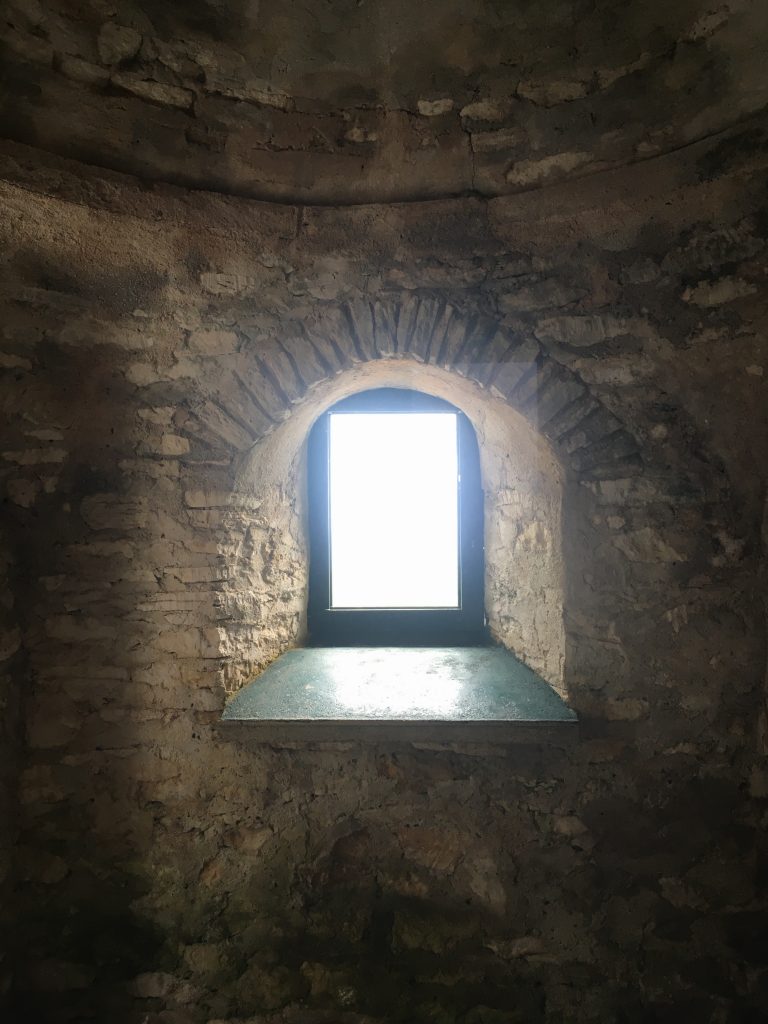 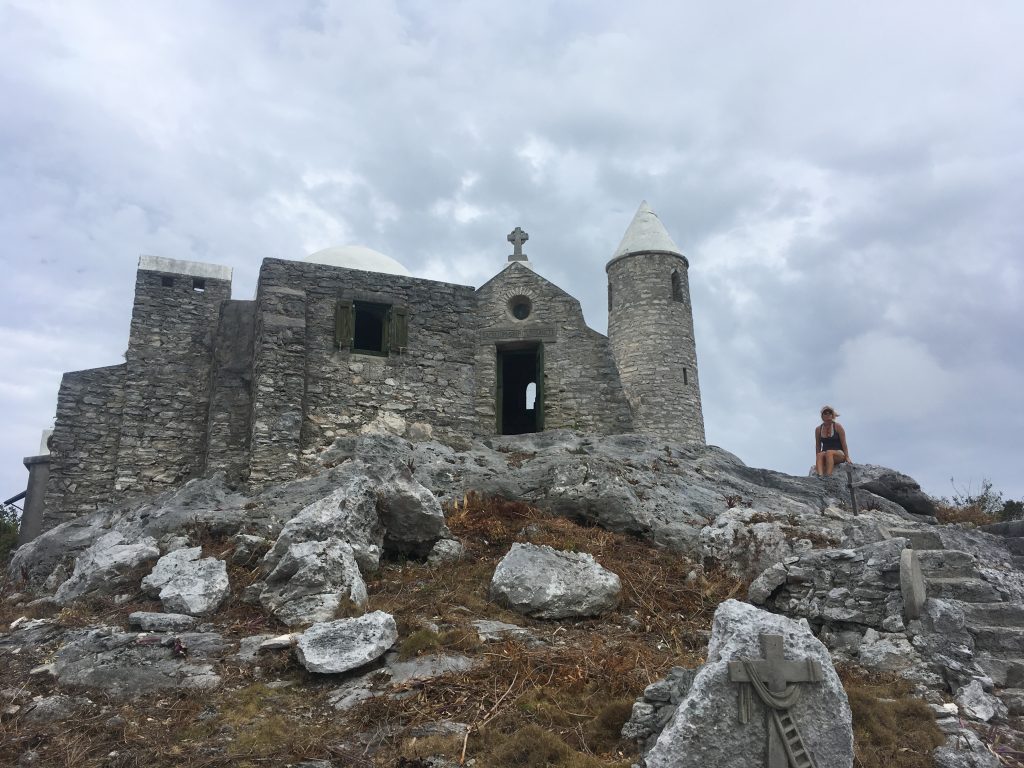 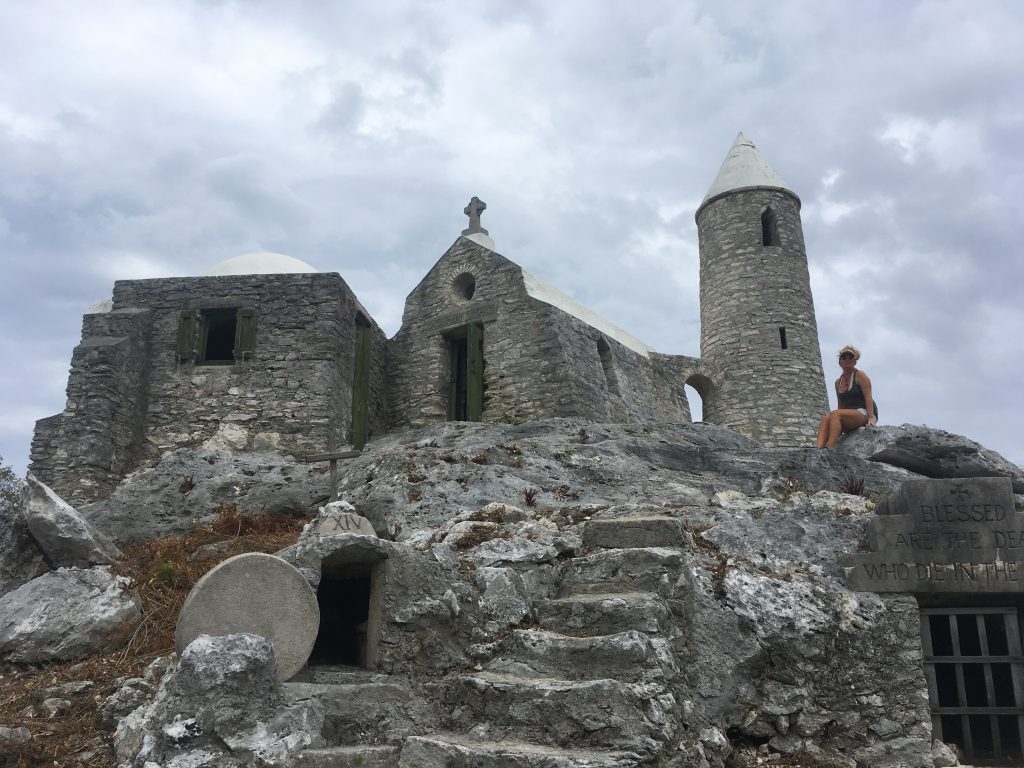 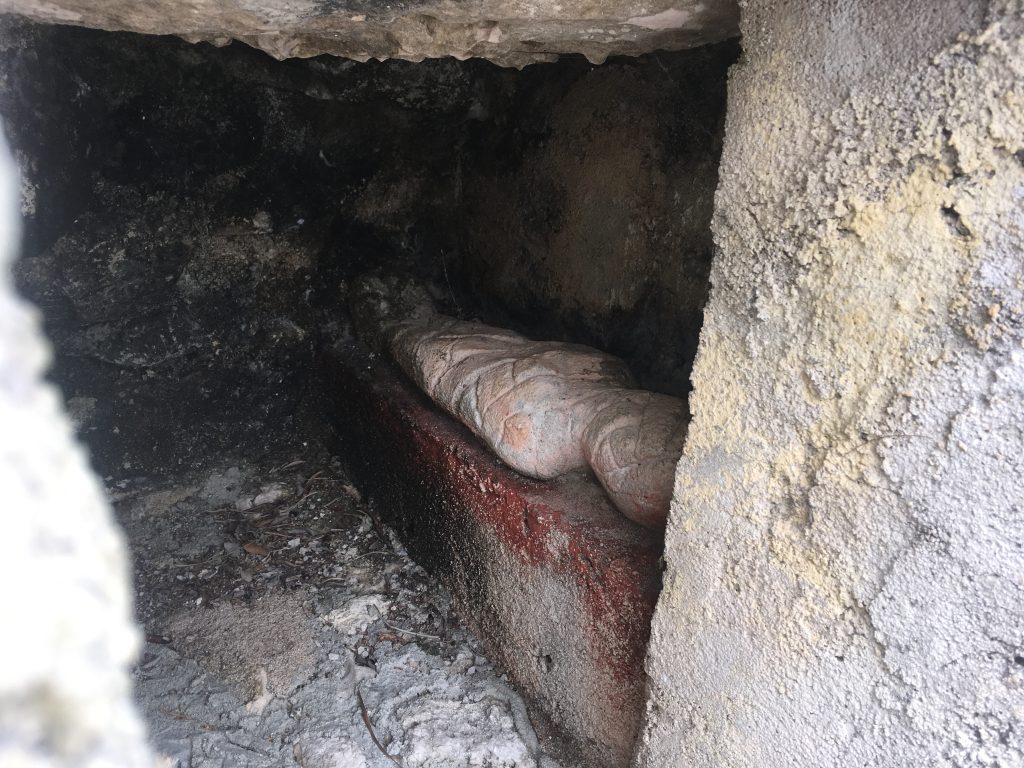 The details of the stations are impressive…..even the model of the tomb of Jesus has a small enshrouded body within it. 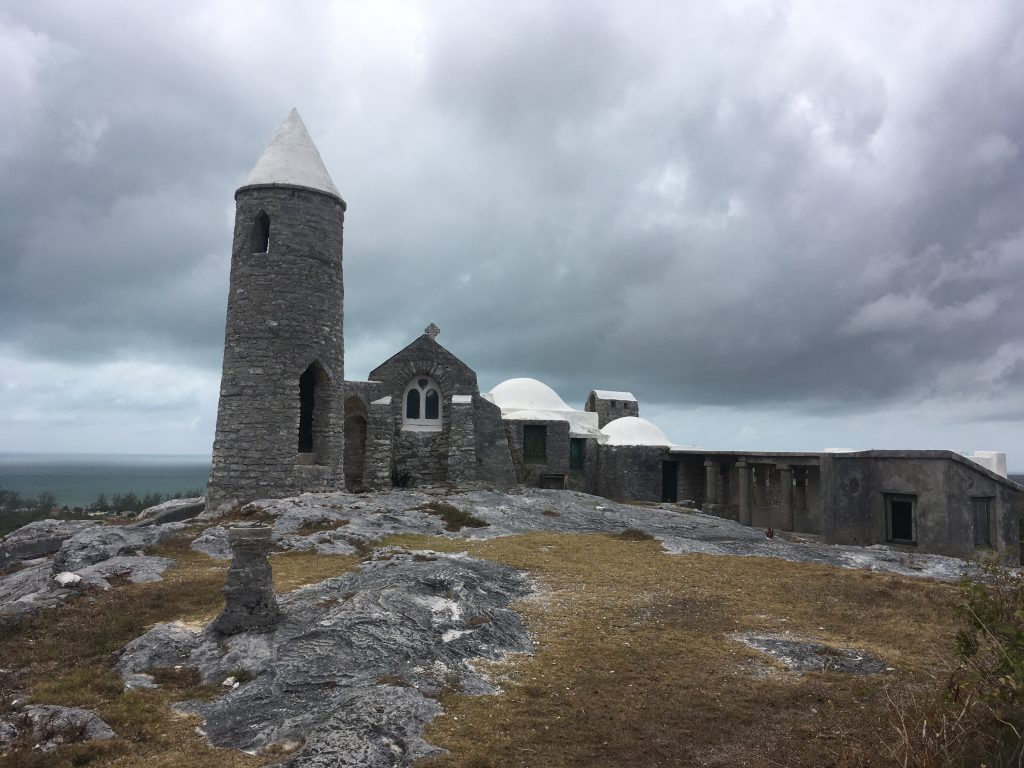 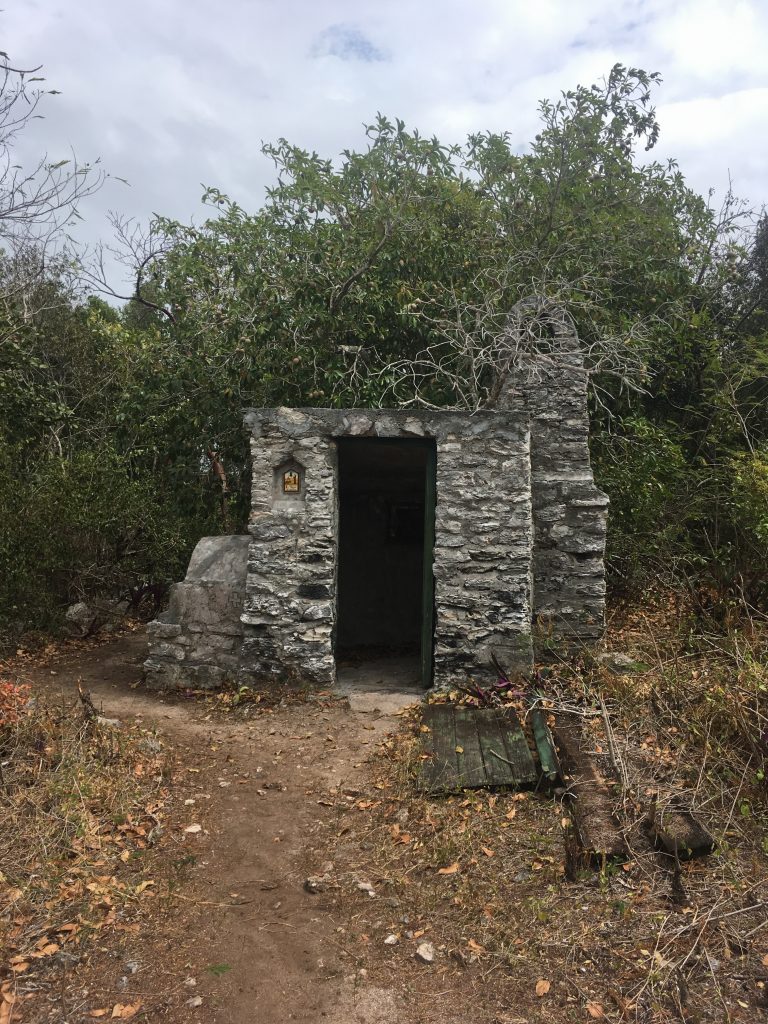 The small remote kitchen for the Hermitage.

We made a quick overnight stop at Fernandez Bay after two bouncy nights at the New Bight anchorage.  Fernandez is a small, somewhat more protected spot just around the point and a few miles North of the New Bight.  It is home to a small resort with a very nice restaurant.

Up next, don’t miss the horrors of Little San Salvador ……