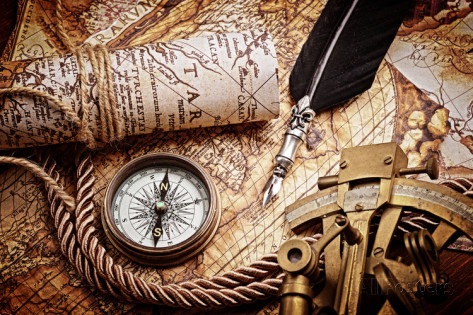 We get this question ….A LOT….

“How do you know where you are or how to get where you want to go?” 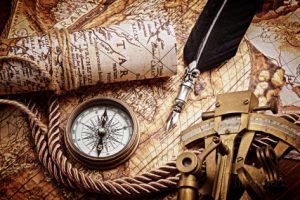 The question makes complete sense.  After all, most people are, at a minimum, accustomed to having at least a road map, road signs and street name signs.  Add to that a Tom-Tom, Garmin or other turn by turn GPS, either hanging on their dash or in their phone.  On top of that, whether they know it or not, they have had a subliminal geography course going on their entire life.  Some people may not be able to find New Jersey on a map, but they can navigate their local area pretty reliably.

What most people don’t realize is that they use a form of marine navigation in their every day life….it’s commonly called Dead Reckoning or D/R for short.  D/R is essentially estimating your position based upon your known direction of travel, your speed, the elapsed time and use that to determine a point between where you started and where you are headed.  You didn’t know you were a Navigator, did you? Just imagine if someone put you in a car on I-75 (that runs North and South between Detroit and Miami). Pick any spot…assume a speed of 70mph and an lapsed time of 5 hours….where are you ? Ta-da !!! A D/R “fix” or estimated position (EP).

Many people, when they imagine marine navigation envision the use of a Sextant and some pretty complicated calculations based on the angles of the sun, moon or stars coupled with other fancy techniques.  Frankly, the sun and stars aren’t always visible, so navigators need a method they can use reliably when they can’t see either, that’s where D/R comes in.

Take a look at the snapshot of the chart below.  That’s an image of a “rhumbline” or direct course from an area South of Miami called Angel cut to Cat Cay (Cay is pronounced like “key”) in the Bahamas.  That rhumbline is 48 miles long. 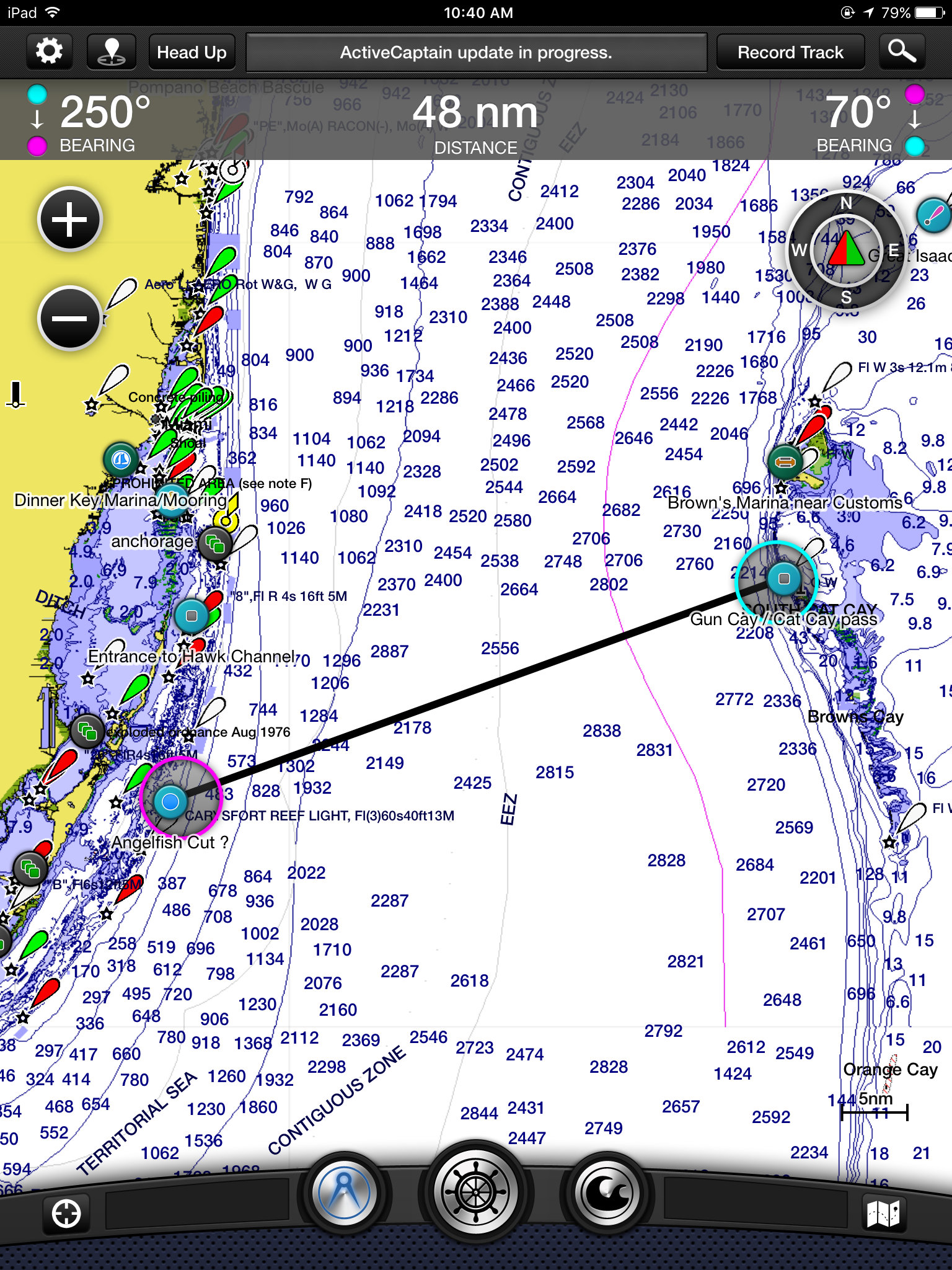 For the purpose of the example, let’s use our boat.  Kitty Hawk averages about five knots per hour under power.  If you average out the sailing speed, 5kts is also a safe number unless the wind really dies, at which point for this example we would fire up the diesel and still maintain 5kts.  A knot is 1.152 miles per hour, much in the same way a nautical mile is equal to 1.1 statutory miles.

We will also assume, just to make things simpler and avoid calculating “tacking”  (which is changing the course of the boat to take advantage of the direction of the wind) the boat, that the wind is coming out of the South at 10 knots.  That means we could sail straight across our rhumbline course on a coinciding magnetic course, using our helm compass and autopilot to be sure we stay on that heading. A course is an intended route….a heading is the actual direction the boat ends up going based on current (like the Gulfstream), wind or other factors.  In this scenario we would need to make a slight course adjustment to the south to stay on our rhumbline course due to the Gulf Stream that flows to the North in this area at about 1.5 to 3 knots.  (That would be a dream crossing to the Bahamas by the way.)  If we left Angel’s Cut at 7pm we could estimate our position on the rhumbline at any given time by multiplying the number of hours passed by our speed of 5kts and our ETA at Cat Cay would be ????

Generally speaking, there are “road signs” out in the water as well.  That way you have a visual confirmation of when you’ve arrived at your intended destination.  While the U.S. has the best marked and best maintained system of waterway navigational aids, (called ATONs, as in Aid To Navigation, in the boating world) the Bahamas don’t do as bad a job as some countries.  Most of these markers are colored (red or green) and numbered so you know when you are approaching the first or last in a line at an inlet, channel, or where you might be in a waterway.    While Cat Cay doesn’t have any channel markers, you have to navigate this inlet by sight.  In contrast, Bimini to the North, is marked by lighted red and green buoys numbered 1 for the green and 2 for the red. When numbered, Greens are odd and reds are even.

In this day and age, GPS and chart plotters have made navigation even simpler.  Our chartplotter is capable of displaying our course, our speed though the water, speed over ground, heading and our position on a chart simultaneously.  It’s always a good idea to have a non electronic backup method, and use it underway, in the event of a catastrophic failure though.  That’s where D/R comes in to save the day. 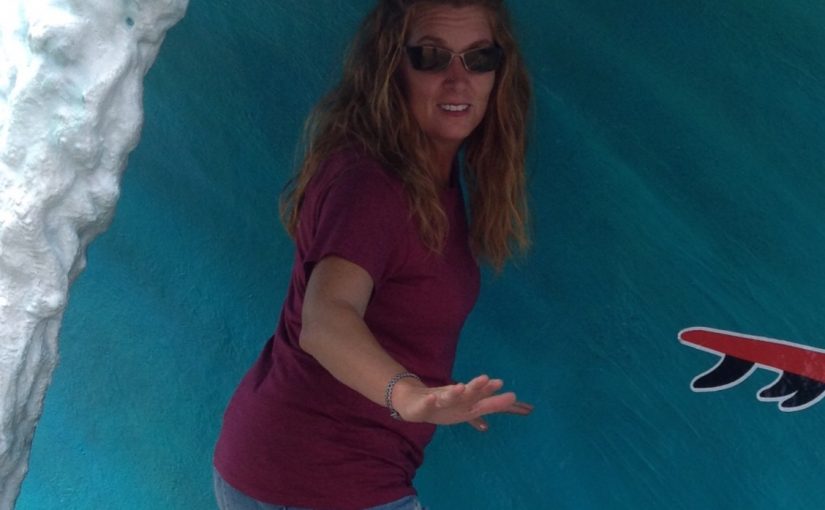 Here’s a cargo ship that passed us on the way into Cape Canaveral inlet….. 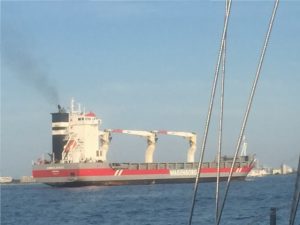 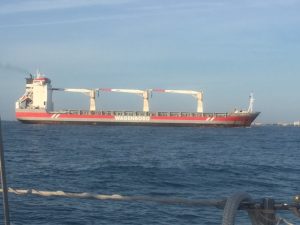 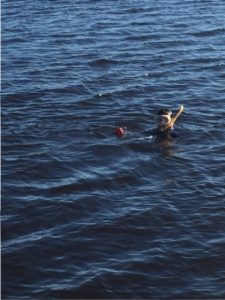 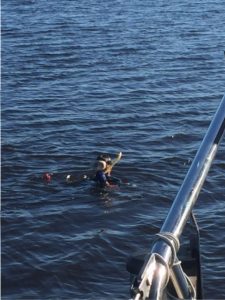 Mike and I checking depths around our potential route out of an anchorage in NC that turned out to be pretty shallow….. 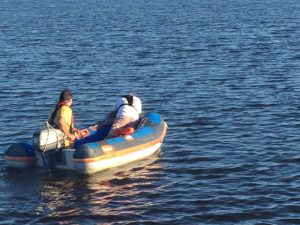 Kim learns to surf…..well….sort of 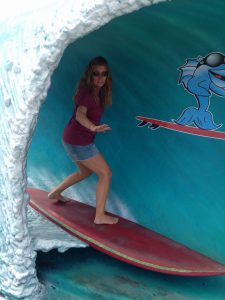 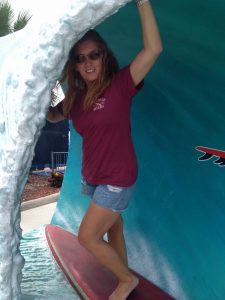 Some shots of the bridge near Boot Key (Marathon)….. 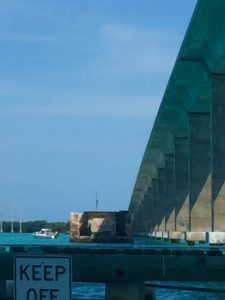 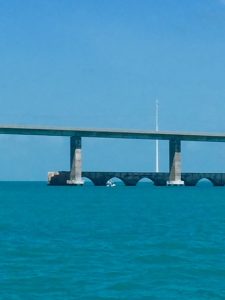 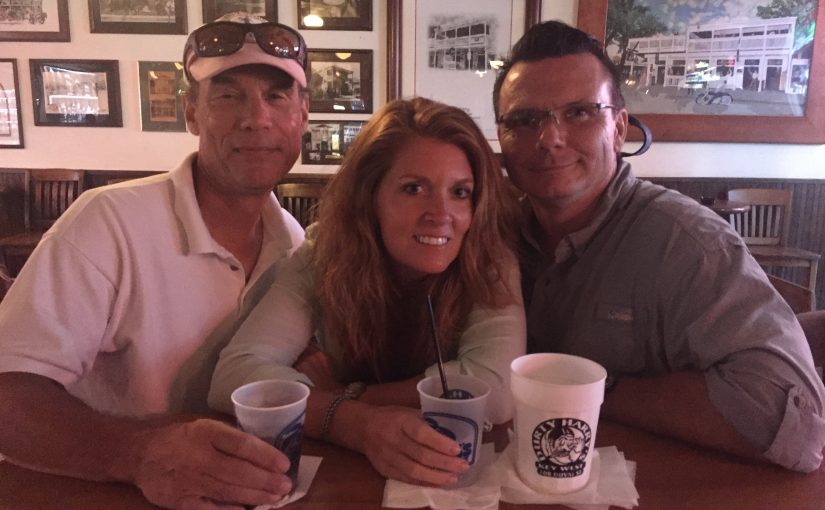 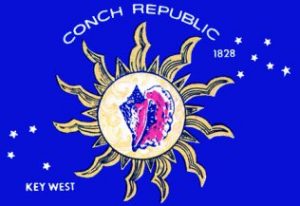 Well, here’s part two…..as promised….sort of…haha.  As I began to assemble the remaining photos of our weeks in Key West, I realized we didn’t have as many shots of us “partying” as I thought.  Perhaps it’s a sign of our age, our recent change in lifestyle or maybe we just forget to be camera happy once we hit the happy hours ? Either way….I need to remember to get a few more shots once happy hour starts !! This post, while shorter on “party” than expected, still has a lot of new, never before seen stuff !!! ENJOY !!! 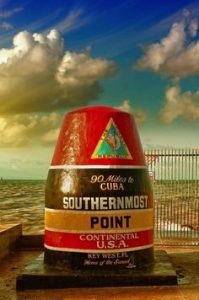 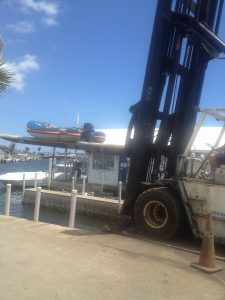 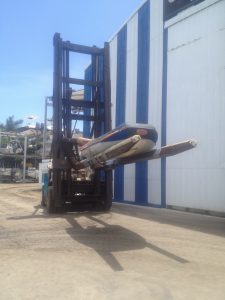 This scene above seemed a tad bit like overkill. We had an issue with our outboard engine “deadman” switch/ kill switch. We had contacted the Garrison Bight Marina to check on the availability of the parts to repair it.  Since our outboard was originally purchased overseas, they couldn’t guarantee the part number they had in stock would fit.  They offered to have their mechanic test fit both versions to make sure it was right.  Since it was only a few more dollars to have them replace it and get a full warranty for labor, we decided to let them do the work while we had lunch at the Thai restaurant next door. I thought the mechanic would just walk down to the dock, but they opted for a full blown haulout of our 9′ dinghy, for which we also weren’t charged, but was fun to watch. 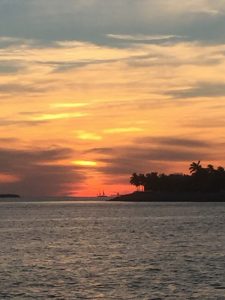 A shot from Mallory Square at sunset….that might be the America 2.0 out there ….. 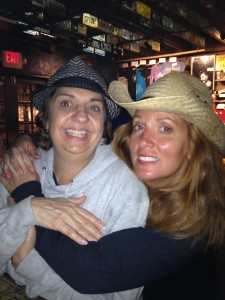 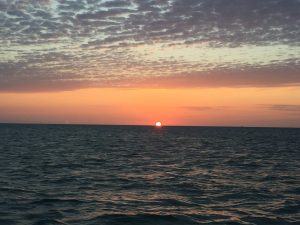 The Old Customs House, as it is known historically, opened in 1891.  It currently houses the Key West Museum and History Center.  It has been, and continues to be, one of the most striking structures in Key West.  It somewhat reminds me of Music Hall in Cincinnati design-wise, despite their technically different styles and size difference.  The photo above is the “Lunchbreak” a bronze statue by John Seward Johnson II.  Johnson, an heir of the Johnson & Johnson talcum powder empire was, ironically, fired from J&J in 1962 by his uncle.  That didn’t seem to affect him much financially.  He is also a first cousin of the actor, Michael Douglas, on his mother’s side.  Seward was initially a painter and turned to sculpture around 1968.  His work has received a lot of criticism since many were simply sculptures based on impressionist paintings or iconic photographs and have been described as “kitschy”.  I seem to recall reading an article somewhere that his larger sculptures were constructed by teams of fabricators under his direction, which may have generated some other criticism. Johnson was a diagnosed dyslexic and attended the Forman School which specializes in the education of people with Dyslexia. 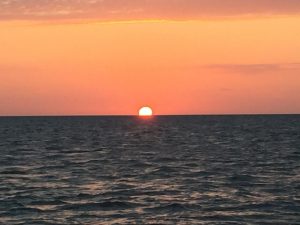 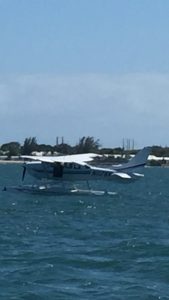 One of our neighbors in the Garrison Bight Mooring Field was a seaplane that would usually arrive on Monday, tie up to a small floating platform that was tied off to a mooring ball. It was met by a small powerboat that was either picking up or dropping off the passengers for the plane.  It was pretty cool to watch him land and take off especially since the prevailing winds were regularly at least 15 from ENE to ESE or so. 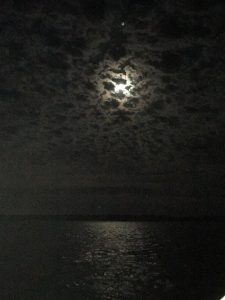 This was  beautiful moon view in the mooring field …..it only photographed so-so unfortunately…..

Recently, I discovered the Amazon Associates program.  Since we order a LOT of stuff from Amazon and have found it a great source for parts at affordable pricing, I was pleased to discover this.

Essentially, whenever we mention a product in a post, we now have the ability to add a clickable link in the post for the product that will take you directly to Amazon where you can purchase it.  It isn’t limited to products but may also be an ad for Amazon Prime (which I’m not sure how I lived without) or some other promotion being conducted by Amazon. We will still have the Google Ads in the posts as well, but the Amazon links will be clearly marked “Amazon” at the borders. Even if you don’t buy the specific linked item, you can use our link to access Amazon and help support our blog since we still get a small commission when you buy items or gift cards through one of these links !!!

In the interest of full disclosure, if any of our visitors use the link AND purchase the item or a gift card, we do get a small commission…..

Please let me know if you think it makes the blog less enjoyable……I’m not a fan of too much advertising, but I also like saving time by avoiding research to find a recommended product I see online, outside of a retailer. I’ll do my best to keep them at the end of the posts to avoid clutter, but please let me know if you’d prefer them nearer to where the product is mentioned.

Thanks for reading, supporting our blog and I hope you enjoy the posts and any products you might buy !!!